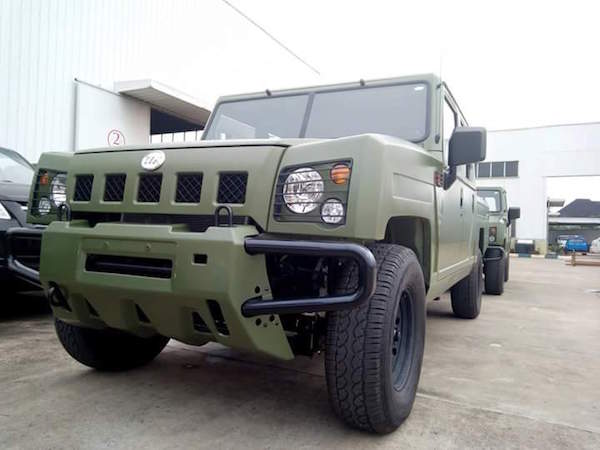 The Minister of Defence, Mansur Dan-Ali inaugurated the vehicles and also performed the ground-breaking ceremony for a new army cantonment known as Muhammadu Buhari Cantonment at Giri, on the Airport Road in Abuja.

The Chief of Army of Army Staff, Lt.-Gen. Tukur Buratai said the vehicles were locally designed and fabricated by personnel of the Nigerian army after extensive research.

Buratai said that the platform would further serve as force motivation as efforts were being stepped up to clear remnants of Boko Haram terrorists in the North-East.

According to him, the vehicles are one of the platforms used for fire power demonstration during the 2017 Nigerian Army Small Arms Championship (NASAC) earlier held at the Sambisa forest in Borno.

He further said that the vehicles could be used for long range battles as General Purpose Machine Gun – GPMG and other caliber of weapons could be mounted on them.

“The inauguration of the patrol vehicles is part of the overall strategy toward the establishment of a military industrial complex which is expected to be a major employer of labour when it takes off,’’ he said.

Earlier, the minister had said that the process of transforming the army was anchored on three pillars, namely: capacity building, reorganization and troops welfare.

He said although the three were embarked upon two years ago, implementing them had not been easy.

Dan-Ali said that the cantonment at Giri would provide the appropriate working and living accommodation for officers and soldiers in the FCT.