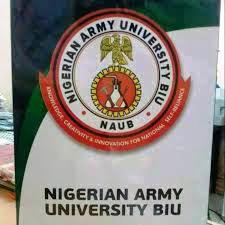 Governor Kashim Shettima of Borno state has said that the Nigerian Army University Biu (NAUB) establishment will enhance scientific and technological development of the north east of Nigeria.

He also added that the institution will further promote peace and development in the region.

Shettima who stated this Tuesday at the ground breaking and foundation Stone laying of the NAUB maintained that, the army university will certainly play a catapotic role in uniting the people in the state and north east as well as serve as a platform for cross fertilization of ideas on security, peace, unity and development of the state and country at large

He added that the location of NAU in Biu, Borno State and North East of Nigeria was unique and strategic with the post insurgency activities while pledging total support to the NAUB development and sustainability by his government.

He said: ” No part of the nation benefitted better than Borno state from the establishment of the Nigerian Army university and sacrifices of the Nigerian military. Because 20 LGAs out of the 27 LGAs of Borno State were under the control of the boko haram insurgents.

“A lot have been lost, many lives lost but today, with the efforts of the Nigerian military, particularly, the army, a lot have been achieved and in the fullest of time, the state will return to its former glory of “Home of Peace”, Shettima said.

In his remark, the Chief of Army Staff ( COAS), Lt. Gen. Tukur Y. Buratai who is also the Chairman, Governing Council of the Nigerian Army University Biu (NAUB) said the NA also do also features in other areas outside its professional mandate to protect the sovereignty and integrity of the nation within the context of leadership of the Nigerian army towards upgrading its equipments, knowledge, capacity, intelligence and improving in the ICT capacity of the NA.

He said NAUB is expected to carry out an intensive research, become the first green university in Africa, serve as a production center for ICT and solar accessories in the north east and West Africa as well as assist Biu community to become center of production and learning.

The COAS added that the university Will regularly attract Nobel prize winners as mentors for students and lecturers alike, create the critical mass for military equipment production in Nigeria and become self sustaining in the foreseeable future, using internal resources and public private partnership platform.

Buratai explained further that with the establishment of the university, security is assured with the two military units and other security agencies in Biu by using the smart concept to reinforce security while the institution will make it mandatory for undergraduate and post graduate students to undertake a 1-Unit per semester course in the total military officer concept to inculcate discipline and leadership aptitude.

He expressed hope that NAUB vision and mission will be achieved while thanking the President, Chief of Defence Staff (CDS), Minister of Education, NUC Registrar, TEFUND Registrar, Governor Kashim Shettima, State Governors, National Assembly members, diplomats, Shehu of Borno, Emirs, senior army officers and the NAUB Transitional/Steering Committee among others for their various contributions, hard work, untiring support and commitment to the realization and successful establishment of the university.

He also appreciated the sons and daughters of Biu emirate and Borno state entirely for their support and cooperation with the Nigerian Army as well as the neighbouring states and institutions in honouring the NA invitation for the historic event.

Four Dead As Terrorists Attack Military Base In Borno