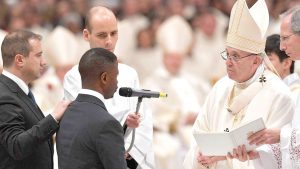 A Nigerian man dubbed Italy’s a�?migrant heroa�? has been baptised by Pope Francis during an Easter service at St. Peter’s Basilica, capping a fairy-tale run in which he went from illegal alien and beggar to being widely celebrated in the European country.

John Ogah, 31, was begging for change outside a supermarket in a Rome neighborhood where many migrants live last September when he stopped a 37-year-old Italian who had just held up the store with a cleaver and was getting away with about 400 euros, according to the Catholic television station TV2000.

The Nigerian, who did not have permission to stay in Italy, held the man down until police arrived and then left the scene, fearing it would be discovered he did not have documents, according to La Repubblica newspaper.

Police using footage from surveillance cameras tracked him down and rewarded him by helping him get legal permission to stay in the country.

An Italian Carabinieri police captain who worked in the neighborhood, Nunzio Carbone, was his godfather, or sponsor, at Saturday’s baptism service.

Carbone and his fellow police officers helped Ogah get his immigration papers. The Nigerian now works as a stockman at a warehouse for a charity organisation.

The baptism, which also involved seven other adults, took place during a long Holy Saturday, or Easter eve, Mass for 10,000 people in St. Peter’s Basilica.

The church, the largest in Christendom, was dark at the start of the service before lights were turned on, signifying the passage from darkness to light when the Bible says Jesus rose from the dead.

The Pope traditionally welcomes new members of the church during the Saturday night service.

The other newly baptised at the service came from Albania, Peru, Italy and the United States.

Francis has made defense of migrants a key part of his papacy.

On Sunday, the pope ends Holy See services by celebrating an Easter Mass and then delivers his twice-yearly a�?Urbi et Orbia�? (a�?to the city and the worlda�?) blessing and message from the central balcony of St. Peter’s Basilica.