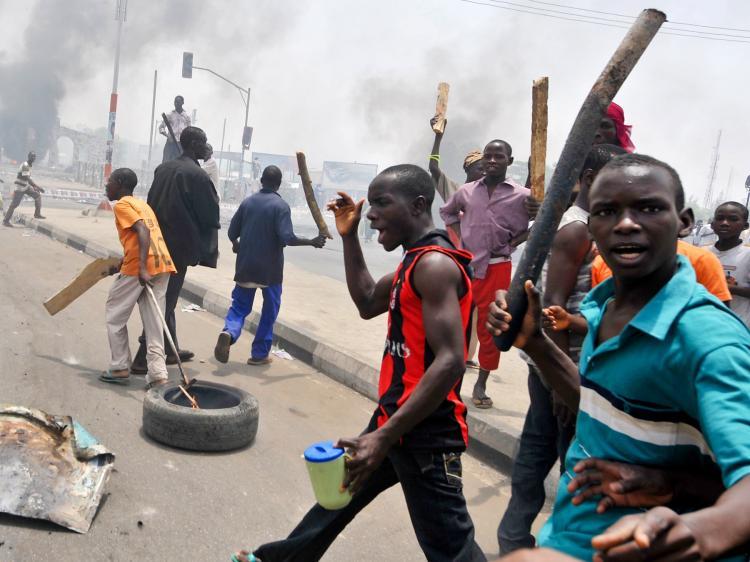 “No truth can cure the sorrow we feel from losing a loved one. No truth, no sincerity, no strength, no kindness can cure that sorrow. All we can do is see it through to the end and learn something from it, but what we learn will be no help in facing the next sorrow that comes to us without warning.” ― Haruki Murakami, Norwegian Wood.


All idiots are morons, but not all morons are idiots.

Let me start this post election admonition with a story that would by five years old, and still not over, in addition I will add another that is also over a year.

Whether it’s Gwoza, Dapchi, or the sadly famed Chibok, this writer has done sizable amount of work on not just Boko Haram but also the killings, abductions and Nigeria’s conflict torn Northwest region.

So quickly let me share what I would like to call some quick facts of the story as it is. I do not expect it to go down well with many, but truth be told, what’s the essence of an opinion if it is made so that it goes down with everyone?

Some of those quick facts, include but not limited to the following–That girls were indeed abducted from the Government Secondary School in Chibok, and that the figures remain conflicting, it is even safe to conclude that no one knows the exact number of girls abducted not even the government, even Boko Haram has lost count of their damage.

Before Chibok, Boko Haram had established a tradition of abducting girls and women, for countless reasons, the authorities were quiet, the media reported a few it could, and let me tell us many parents equally kept quiet and took it all in their stride.

This writer had interviewed several girls and women who were victims; they escaped one way or the other.

I equally know that for a fact many believed that Mr. Buhari and the ‘North’ however defined was and is Boko Haram, and that with Buhari now as president, the girls would be found. And many still don’t understand the whole Dapchi Episode and how Leah was left behind.

Others are also firm that the whole Boko Haram thing was PDP, a political arrangement, after all it was late Abacha that propounded that theory of “if killings go on for so, so and so time, the government knows about it, or are behind it.”

Did the late Gen. Azazi not even help by stating it was PDP and he was “killed”?

Okay another fact I know is that some are equally certain it is an Islamic quest, or conquest and jihad. Same as those that believe it was Jonathan and his Christians bent on killing all Muslims in the North.

Cruel fact is that, several hundreds of girls that are victims of this terrible group have paid the ultimate price, a few have escaped with almost irreparable damage, others have become part of them, and we have not done much.

It is equally a fact that one of the many reasons that Boko haram may continue for a while is because many still do not know what the group is all about, does it have an ideology, what really is it about…a CIA conspiracy or a thing about poverty?

I also know that based on what is out there, many experts on the subject matter are foreigners and one wonders.

We have seen the metamorphosis to ISIS West Africa…The questions are many, but as we continue to run commentary on the #bringbackourgirls advocacy, reminding us of the Chibok girls, I cannot but feel for the real parents, how many are now making money out of them. How a part and not all, of the campaign has become like many a CSO thing–a source of income, with the Nigerian factor at work.

I do not always believe former Olusegun Obasanjo, but I agree with him when he asserts, “many, most, half of these girls will never come back…” That is a fact! A sizable number have passed on, sadly so!

And the drama of what I call the international week of Boko haram—the week were United States, UK, France, China, Togo, were all willing to help, and how the drones were droning. Nothing happened!

One recalls the dramatic negotiation and Chadian ballet between Modu Sherif, Idris Derby and Jonathan, for a fact it simply occurred to me that we are not really a serious people on matters that we should be serious. Fact is, one simple answer, many of our tales of nationhood looks like that of morons and idiots…

The Chibok parents and Leah’s continue grieving and mourning, but really it is more of bewilderment and pain, as they do not know exactly the situation of their wards.

We have lost men and officers, more villagers have been killed and loads of propaganda, half-truths, misinformation and sheer falsehoods, fight between now opposition PDP, and governing APC, even the airforce has accused the army of taking their shine. The army has had a mutinous situation, local media vs. foreign media, and Christians/Muslims.

But fact is that we do not have value for lives, while the daredevil Boko Haram group seems to have frequently had the edge, making all sorts of demands, releasing videos, and creating more confusion begs the bigger picture.

So we have just concluded the presidential and National Assembly Elections. Some scores of lives have been lost, and despite our clinging to all sorts of PVC and voters rights, as a people we have no right to life.

Rights to security, rights to health, education and more, which ultimately leads to quality life, are denied Nigerians. Nigerians are denied justice, citizens are killed and no one is liable. Campaigns have seen all sorts of promissory notes but the truth is elusive as in the last few years…

Meetings were held in Paris; committees set up, ‘dia was god’, Obama spoke, Michelle added her voice, so many stars, celebrities and a few nobodies like me but as we enter a new Atiku presidency or a continuation of Buhari’s levels, the fact is that some girls just disappeared.

They were abducted because our institutions are not working the way it should, the girls’ will/may not be found because we are not sincere people, and because many of them are dead, and because we are largely and easily divided by our selfish motives. We all engage in blame games, but let us remember that the longer we are on this Chibok saga we only portray ourselves as morons and idiots, will we celebrate the return of Leah December 2019, or will we hear the real story, the true story, will the right to life be respected—only time will tell.

9 thoughts on “Nigerian elections and right to life”