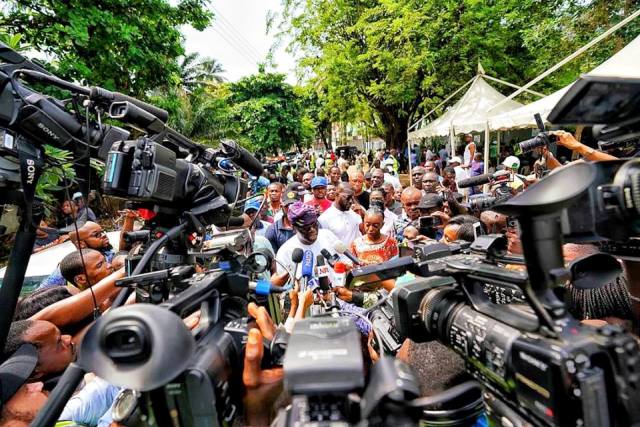 The Nigerian media played and continues to play a pivotal role in the affairs of Nigeria. While colonial rule lasted, the likes of the Lagos Daily News co-founded by the Father of Nigeria’s nationalism and Wizard of Kirsten Hall, Herbert Macualay and John Akilade Caulcrick, the Zik Group of Newspapers, Nigerian Daily Service, Nigerian Tribune were radical in nature and campaigned virulently against colonial rule. They did their best to hold the government to account and were a constant source of nightmare to the British overlords.

During the ill fated era of the military, the national newspapers like the Guardian, Punch, the defunct Concord, Tribune as well as magazines like the defunct Newsbreed, Newswatch – the first to be established by journalists, The News, Tell etc battled the military and awakened the consciousness of Nigerians to the beauty of living in a democratic setting with the beauty of the freedom of expression as one of the best things that could happen to any mortal.

The various repressive governments hit back at these hapless pen pushers with the ferociousness of a wounded Lion. Some like Dele Giwa, Bagaultha Katho, Godwin Agbroko, Abayomi Ogundeji, Bayo Ohu paid the supreme price. Many others like Anthony Enahoro, Babafemi Ojudu, Senator Christy Anyanwu, Kunle Ajibade etc were kept behind bars without any lawful trial. The likes of Dele Momodu, Dapo Olorunyomi etc had to flee to the west on exile when their lives became in great danger from the barrel of the guns of the military goons.

The fourth Republic came to power in 1999 and the media was well prepared to keep the government on its toes as the fourth estate of the realm. The News broke the story of the educational and age scandal of the pioneer Speaker of the House of Representatives, Salisu Buhari. It was discovered that he didn’t attend the prestigious University of Toronto and he inflated his age by seven years. He was forced to resign. The same magazine broke the University of Chicago scandal story involving the then Governor Bola Ahmed Tinubu. It made a buzz for a while before it fizzled out like the candle in the wind. The same magazine broke the story of the former United Bank for Africa Chairman, Hakeem Belo-Osagie’s alleged money laundering and round tripping activities which forced him to resign.

Then came the advent of the internet and social media which greatly changed the media landscape. Traditional journalists who were hitherto the exclusive purveyors of the news found that power taken away from them by ordinary people who simply just had an internet enabled phone and some data. These citizens’ journalists as some like to address themselves ultimately usurped the role of the old school information gatekeepers as they gathered the news, published them with the speed of light, gave informed news interpretations and did investigations.

To the chagrin of the traditional media practitioners, they had to play catch up as many of them lacked digital skills which are now a sine qua non to practice journalism in the 21st century.

The likes of Nigerian Village Square, Elombah.com and Nairaland blazed the trail of the new media in terms of content and traffic to their portals. In 2006, something huge happened as Omoyele Sowore, popular human rights activist who was exiled in the United States parted ways with the Founder of Elombah.com to found Sahara Reporters. From its base in New York, its focus on corruption and bad governance greatly rattled the governments of the day. It treaded where the traditional media wouldn’t tread and made the job of the Economic and Financial Crimes Commission (EFCC) easier through its whistle blowing of the assets corrupt Nigerian leaders possessed abroad. Sowore isn’t a trained journalist and they made use of ordinary Nigerians as citizens reporters. Their speed and accuracy in which they disseminated hitherto classified information kept the traditional media gasping for breath. It was Sahara Reporters who broke the story of former President Umaru Musa Yar’adua.

In 2011, veteran investigative journalist, Dapo Olorunyomi launched the popular online newspaper, Premium Times which is the dread of the government as they hold them to ransom with their in depth investigative journalism. They leaked the news that former Finance Minister, Kemi Adeosun forged her National Youth Service Corps certificate which forced the British returnee to resign. The Cable berthed in 2014 and has done many ground breaking stories. Others like Pulse which is the media arm of the Swiss based Ringier media, Bella Naija, Linda Ikeji Blog, Instablog naija, Legit formerly naij.com, Opera news cater to the ever increasing demand for soft news and light talk.

It is a well known fact that salaries are being owed to the members of staff in the traditional media. There is no health insurance scheme or pension plan for these hardworking scribes and if anything bad happens to them, the fate of Boxer in George Orwell’s ‘Animal Farm’ will be sadly theirs. To make matters worse they pontificate about the ills of the government without addressing theirs first. I recall with a tinge of sadness the way they fought former Governor Rauf Aregbesola over the non payment of salaries for months only for their accumulated arrears to resurface as a sore thumb.

While it is inhumane and criminal to deny these hardworkers their legitimate monetary reward, it is also disheartening that these pen pushers prefer to remain in slavery and chains rather than standing up to their bullying employees and calling their bluff. Agreed, the system favours the employers who are friends of those in power but there can be more camaraderie amongst colleagues in which they take advantage of the numerous opportunities inherent in the new media to launch themselves into financial liberty. Nobody is saying it is going to be easy but it’s better to suffer now and enjoy later than to continue to suffer ad infinitum.

Traditional media journalists aren’t dogs and shouldn’t be treated as worse than the scum of the earth by their employers. If the workers massively boycott working for deadbeat employers, the latter will be forced to give them a new deal as they cannot do everything by themselves. Some critics of this opinion have opined that there are always willing hands ready to work for free because of the lingering unemployment. That is where sensitization comes in to tell their potential sacrifice lambs of the vast opportunities that is inherent in the media which will make them better off financially than being owed a piddling for months and even years.

The movie ‘Who stole my cheese’ is an eye opener for those who refuse to change with the moving times – they will simply be left behind while things pass them by. They may end up waking up like ‘Rip Van Winkle’ who slept before America’s Independence and woke up after the war of independence was won. It was a different America which he could not fit into.

Adverts are fast shrinking due to stiff competition from the social media and the earlier media owners rethink their revenue models, the better. The media space is fast moving towards a reader funded model whereby readers fund their favourite media houses to keep them afloat and some have resorted to using the pay wall system to generate additional revenue. I recall vividly when African Independent Television (AIT) had to resort to crowd funding from the Nigerian public to stay alive when they nearly went under in 2000. What is needed is the trust; once it is earned it can be turned into some form of mass movement where donors will contribute to their well being. There are crowd funding websites like Kickstarter, Indiegogo, Gofundme etc that help raise funds for worthy cause and journalism is one such deserving one. There is also Patreon which helps artists and writers get funding on a regular basis from those who enjoy what they do.

It is high time Nigerian journalists stopped the pitying party and futile card carrying and tap into the robust opportunities that the new media has to offer. They should stop acting like the native medicine healers in Nollywood movies who help people achieve their dreams without any means of helping themselves.

The time to sack their wicked employers is now!
Tony Ademiluyi writes from Lagos and edits www.africanbard.com

Our Isi Ewu Education and ‘zations