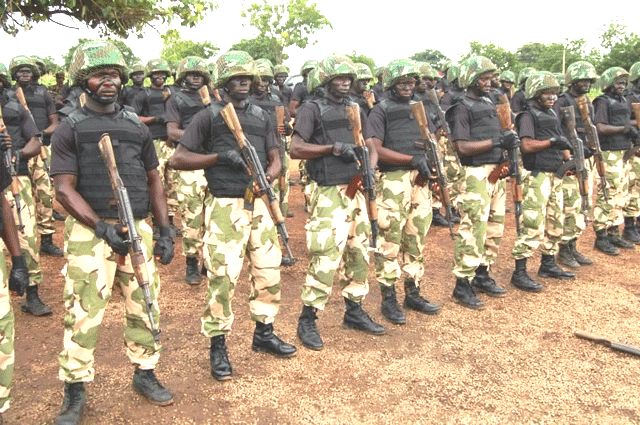 In what may yet be the most ridiculous and shameless attempt at defense of barbarism and the apparent state organized genocide of the 15 million shia Muslim minority population of Nigeria, the Nigerian army has posted a video of a US president Trump threatening foreign immigrants at the US border, to justify its use of excessive deadly force against peacefully protesting and at times rioting Muslim youth.

The attempt at defense insults the mind of every conscientious Nigerian citizen and global observer for the following and many more reasons:

Firstly: The United States president's threat was against foreign nationals and not citizens of the state. The Nigerian government terrorizes and massacres tax-paying citizens of Nigeria and not illegal aliens. (Unless the poor, youth and minorities are not full-fledged citizens of Nigeria in their view)

Secondly: The threat by the United States president is just that, a threat and not action. There is no record of similar action against protesting or rioting citizens of America or foreigners. While the Nigerian government has a serial record of unjustified massacres; from Odi massacre of over 2000 perpetrated by Obasanjo and Atiku, to Baga and Kaduna massacres by Jonathan, to Buhari's Zaria, Onitsha massacres of 1000+, Nigeria is the world leader in state perpetrator terrorism of its citizenry.

Thirdly: We can be assured the US army would have first applied maximal cautionary and riot control measures, including firing tear gas, using water cannons, rubber bullets, shields, batons and other tools before targeted and not random firing.

Quoting CNN: 'Official Department of Defense regulations say “deadly force is justified only when there is a reasonable belief that the subject of such force poses an imminent threat of death or serious bodily harm.” to a person.'

Fourthly: In the event that US professional soldiers do fire, we can be certain they will not fire indiscriminately and massacre dozens as the Nigerian army does, but only non-lethally target most violent individuals in legitimate self-defense.

Fifthly: If the US does fire, it will stand by its action and declare the numbers killed and not say it was only “3” as the Nigerian army always does.

Sixthly: In the event the US army does fire and kill, it will never secretly bury the victims as the Nigerian army typically does. (Done in 2015 Zaria massacre, done in 2016 Onitsha massacre, done again this year in Kaduna and recently in Jos)

Seventhly: The US president talked about the throwing of rocks and not stones.

Eighthly: Unlike Nigeria where the authoritarian and tyrannical regarded Buhari government sends soldiers as a first-line, replacing the civil authorities or “law enforcer,” police, who have now been depleted to mere boy scouts, the US insists the army will only be a second line in aid of the civil authorities as all national constitutions state.

Again quoting CNN today: “Defense officials have repeatedly emphasized the troops at the border are there to support civil authorities and that they are not expected to come into any contact with migrants.”

While the utterances of US president Donald Trump have been roundly described as unguarded and those of a civilian leader and one particularly known for speech games – like threats to nuke nations – for the Nigerian army, trained in Rules of Conduct to make equivocal comments and turn them into actions with genocidal results, and then resort to US president Trump's comments on its official public handle in defense is beyond belief. Heads should roll.

Even Israel who president Buhari apparently hypocritically condemns has been recorded to exhibit more restraint against the Palestinians than the Buhari government. A recent AP video captured Israeli troops firing tear gas on Palestinians throwing stones at them and not attempting to massacre the protesting Palestinians. See: https://youtu.be/-VN5Cvx6NgI

No civilized nation in the entire world unleashes deadly trigger-eager, blood thirsty force against peaceful protesters or even rioters.

With only military training and no other organized civil experience or training in his life, Buhari rules Nigeria in Gestapo style. The entire deployment of soldiers around the nation as primary law enforcers in Marshal Law, is in violation of the constitution and global human rights. Soldiers do not have handcuffs, so they cannot arrest. As late sage Fela sang, Zombie way na one way — to shoot and kill. Soldiers cannot arrest because they cannot present charges in a court. Thus they can only work in support of police, else they kill and cover their tracks with secret burials in Saudi-Khashoggi style, and as we keep seeing in Nigeria under Buhari and his army chief Buratai.

Ironically, unlike former presidents late Umar Yar'Adua of esteemed memory and even Goodluck Jonathan, Buhari in his dictatorial lawless habits, grants amnesty for terrorists without consulting the council of state as the constitution stipulates. [See: https://ynaija.com/pegrino-brimah-nass-should-review-buharis-boko-haram-amnesty-for-possible-impeachment/ ]

Nigeria is in serious trouble, and Atiku, Buhari's brother who is co-responsible for the Odi massacre of over 2000 innocent Ijaw minority Nigerians, who Buhari aims to hand over power to is no different. Atiku has even been accused, according to then governor of Kaduna, Makarfi, of conspiring with former NSA Aliyu Mohammed Gusau and the Izala kingdom-sponsored group in the organized massacre as many as 5000 innocent Nigerians killed in the “Ms World” and “Shariah” deadly riots of 2002, merely to “frustrate Obasanjo.” [See: https://newsrescue.one/bombshell-us-wikileaks-cables-atiku-gusau-izala-behind-radical-terror-in-kaduna-benue-katsina-others-gov-makarfi/ ] The poor, minorities are dead under the Buhari APC leadership as they have been and will again be under a PDP leadership.

Crimes Against Humanity: Nigerians Must Hold Leaders To Account Each Time, On Time

We must pick up a habit of immediately holding our rulers to account as and at when due and not by hoping on and waiting on a transfer of power that will go to the biggest looter and best rigger of a single group of soul-less jackals. Nigerians must urgently call for the immediate sack and impeachment of the heads of service and commander in chief of the armed forces and their trial for crimes against humanity.

Advice To Protesters
And a note to protesting groups: Please protest and fight for freedom for the entire nation and not just a leader or ethnic group, and perhaps you will see the entire nation rally behind you. Because we are all fed up, but your personalized and sectional battles deny you of sparking the civil revolution Nigeria desperately deserves.

the Place Of Orlu Zone In Imo Guber Election