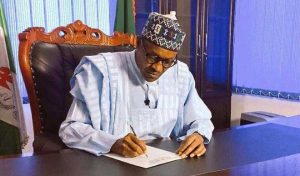 Nigerians have expressed dismay at the tardiness of president Muhammadu  Buhari administration which announced the appointment of 209 board chairmen and 1,258 board members late Friday, with dead persons making the list.

The social media have been awash with reactions verging on blatant mockery and utter disbelief.

But the presidency has reacted to the controversy generated by the appointment, Friday evening, saying it was an error made possible by the circumstance of the appointments.

Garba Shehu said “the list has a history” which explains the controversy around it.

“In 2015, Mr. President requested all state chapters of the party to submit names of 50 party members for board appointments,” Mr. Shehu said.

He said the names where compiled by the national secretariat of the APC and forwarded to the then secretary to the government of the federation, Babachir Lawal.

“However, complaint arose from some governors who felt they were not carried along in the process. To answer this, the president constituted a committee under the vice president to review and reflect the interest of the governors”.

Mr Shehu however said action was delayed on the report of the committee headed by Vice President Yemi Osinbajo as President Muhammadu Buhari took ill.

“The president’s trips for medical attention slowed down completion of the process,” he said, until when Mr Buhari decided to revisit the matter recently.

“The current SGF was only directed to complete that process by releasing the list which he apparently did without altering it,” Mr. Shehu explained.

an embarrassment that has since gripped the nation and got everyone on social media talking.

In the list released late Friday, contains the name of Chief Donald Ugbaja who was appointed member of the Consumer Protection Council (CPC), died on the 29th of November, 2017.

Reverend Christopher Utov who was appointed member of the Nigerian Institute of Social and Economic Research, died in March of 2017.

But that didn’t stop Utov—once the proprietor of Fidei Polytechnic—from getting a job in the  president’s bureaucracy.

Francis Okpozo, a second republic senator and a former member of the BoT (Board of Trustees) of the APC, was appointed board chairman of the Nigerian Press Council.

In the case Okpozo, he died  died in Benin City on Boxing Day of 2016 from an illness; with his family even getting a condolence letter from Buhari.

The Presidency however downplayed the matter Saturday as, according to a spokesman of the president, there was nothing scandalous about the list.

Mr Shehu admitted that errors were committed but added that “no human undertaking can be free of mistakes”.

He said the errors identified with the list were not enough to describe the exercise as scandalous, insisting that “there is no scandal”.

The spokesperson said all errors in the list would be corrected.

President Buhari condoled the government and people of Delta State following the death of Okpovo who died at 81, on Wednesday, December 28, 2016.

The statement was issued by Buhari’s Special Adviser on Media and Publicity, Femi Adesina. A report by Pulse, lists some of the reactions by Nigerians which are no way salutary to the incumbent President Buhari administration. ‘Special kind of incompetence’

“It can be taken for granted that the Muhammadu Buhari administration is incompetent. But it takes a special kind of incompetence to appoint not one, not two but three dead people into boards and agencies. Never done before in our national history”, wrote Twitter user @I_am_Anomeli.

“Just three dead people on the list so far. We thank God. It could have been 6 or 12. Buhari is really trying. Please let me know if you find any more dead people so we can report those names to the nearest mortuary”, wrote @DoubleEph.

“How do you appoint people and not check whether they are alive, well and capable of executing the functions of the office to which they are being appointed? Let’s not even talk about checking whether they share core ideologies and abiding principles. Check that they are alive!!!”, added @I_am_Anomeli.

Another twitter user with the handle @marmekus wrote: “Maybe this list was sent to him long time ago but in his usual nature; he delayed to act. Worse, nothing was done to crosscheck the list again before releasing it to the public. This is a new level of low in governance in Nigeria”.

@Samuelngadi wrote: “The cute thing about this is how people think this is a mistake and not a deliberate attempt to loot and go scot free. Dead men don’t get probed or arrested by EFCC. Another funny thing is how people think it has never happened before.”

Another Twitter user, Biola Kazeem, wrote: “Herman Hembe, accused of corruption by Aruma Oteh and sacked from House of Reps for electoral fraud, appointed as board chairman by a president who hates and despises corruption and corrupt people. Ladies and gentlemen, change according to Muhammadu Buhari”.

Freo giant gears up for one more year

8 thoughts on “Nigerians flay Buhari for naming 54 dead persons as board appointees, but Presidency downplays error”