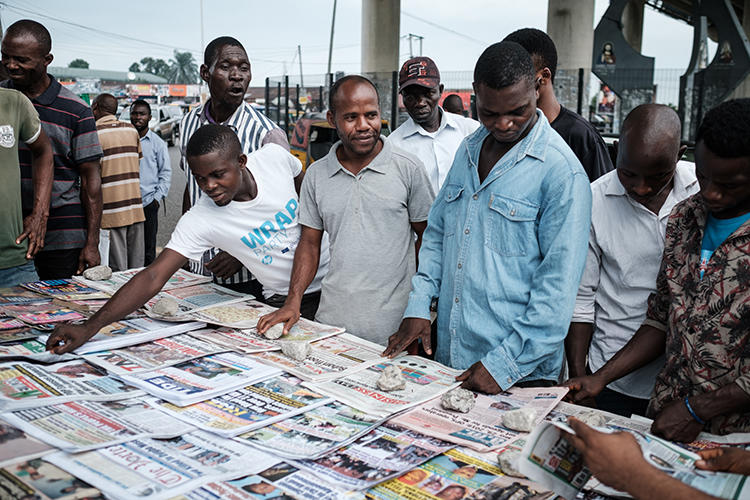 New York, March 6, 2020 — Nigerian authorities should ensure that Premium Times employees are able to work in safety and without interference or intimidation, the Committee to Protect Journalists said today.

Samuel Ogundipe, a reporter with the privately owned online newspaper, told CPJ in a phone interview that he went into hiding on February 28 after receiving several threatening phone calls, his professional email was hacked, and he was warned by a source within the Nigerian security forces that he may be arrested as part of an effort to identify the source for a series of reports published in Premium Times.

Premium Times editor-in-chief Musikilu Mojeed has also faced intimidation attempts since the reports were published, according to a report by the paper, and the Premium Times website faced cyberattacks, according to the outlet’s web host, who spoke with CPJ.

The reports, the first of which was published on February 17, were based on leaked documents and alleged that relations between Nigeria’s national security adviser, the army’s chief of staff, and the chief of staff for the presidency were strained.

“The safety of Samuel Ogundipe, Musikilu Mojeed, and everyone else working with Premium Times must be a top priority for Nigerian authorities,” said Angela Quintal, CPJ’s Africa program coordinator. “No journalist, in Nigeria or anywhere else, should feel threatened or fear that they may be arrested or forced to reveal their sources.”

On February 20, an anonymous individual called Ogundipe twice and told him to stop reporting, he said. The next day, another person who said they worked with the Nigerian army headquarters called Ogundipe and asked him to confirm his name and the location of the Premium Times office, Ogundipe told CPJ.

On February 28, Ogundipe said he woke to find a notification that someone had accessed his professional email.

Ogundipe told CPJ that on March 1, while he was in hiding, a pair of men parked outside his home and looked through his fence, his neighbors told him.

Two men arrived at Mojeed’s home the same day and asked his wife, Haulat Mojeed, to open the gate so they could deliver a parcel to her husband, according to Premium Times . When she asked them to pass the parcel through the door and said she would have to call her husband to confirm he was expecting a package, the two men declined and drove away in a car with tinted windows, according to that report.

The report said the men at both journalists’ homes were suspected to be agents of Nigeria’s State Security Services, also known as the Department of State Services (DSS).

Premium Times’ website was targeted by multiple cyberattacks, including probes seeking to identify vulnerabilities on February 28 and 29 and distributed denial-of-service (DDoS) attacks aimed at taking the site offline on March 1 and 3, Tord Lundstrom, chief technology officer for Qurium, which serves as the outlet’s web host, told CPJ in a phone interview.

Lundstrom told CPJ that Premium Times’ website is subject to low-level attacks on a weekly basis and higher level attacks during election periods, but said, “This is the first time we’ve seen an attack at this scale outside of elections.”

“If the security forces want any of our staff, we would be happy to present them in a way that will ensure clear accountability,” Premium Times said in a statement on March 1.

On February 29, CPJ messaged Peter Afunanya, spokesperson for Nigeria’s Department of State Services, requesting clarity on whether the service intended to arrest Ogundipe. The next day, Afunanya responded with a statement that denied the DSS were targeting Premium Times journalists and characterized reports suggesting as much were “unfounded” and “needless sensationalism.”

The statement denied that there was any “such operation at the moment by the Service targeted at the Premium Times, its editor or staff,” and said, “Now the Service is not anywhere near the news agency.”

The statement also denied that the DSS had “hacked the phones of one of its [Premium Times’] staff.”

In August 2018, Nigerian police lured and arrested Ogundipe using his phone records, then jailed and charged him for refusing to reveal his source for a report on leaked police documents, according to CPJ research .

Liberians Still Hope For Peace As They Vote