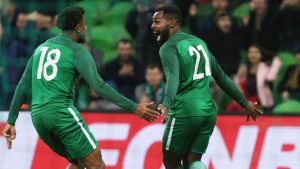 Nike Football shared a video on their official YouTube channel which reveals several of the national teama��s key men catching a first glimpse of the teama��s new attire.

In the 1 minute 20 second clip, Wilfred Ndidi, John Obi Mikel, Alex Iwobi and Kelechi Iheanacho are shown giving their verdict on what is a dazzling offering from Nike.

a�?I can see the players going crazy over this one,a�? Mikel said when he was shown the national sidea��s home shirt, in Nigeriaa��s famous dark green with an eye-catching neon logo.

The away kit, a neon and white retro design on the body, and dark green chevrons on a white background on the arms, received a more muted response.

a�?This is different, you know,a�? Iwobi added, somewhat diplomatically, while Ndidi was a little more enthusiastic, claiming he just a�?couldna��t waita�? to get the kit on in Russia this summer.

Despite the mixed reaction, the kita��s similarity to the iconic shirts worn by the nationa��s Golden Generation in their maiden World Cup campaign in the United States in 1994 should earn it major points for nostalgia among Super Eagles supporters.

a�?A constant in Nigeria is an endearing love of football,a�? NFF President Amaju Pinnick, told Nikea��s official website . a�?When football is on, everything stops. The new Nike kit designs honour our federationa��s rich traditions. Moreover, they celebrate everything we relish about our culture.a�?

a�?With Nigeria, we wanted to tap into the attitude of the nation,a�? added Dan Farron, Nike Football Design Director. a�?We built this kit and collection based on the playersa�� full identities.

a�?We started to see trends in attitude and energy connecting the athletes to music, fashion and more. They are part of a resoundingly cool culture.a�?

According to the New Telegraph Online , Nike presented the kits to the Nigeria Football Federation at a ceremony in London on Wednesday.

Nigeria are using Nike as their kit manufacturer after having been fitted by Adidas for their last two World Cup campaigns a�� in 2010 and 2014.

They will wear the shirts for the first time on March 23 when they face Poland in a friendly in Warsaw.

Nigeria have been pitted against Croatia, Iceland and Argentina in World Cup Group D.(ESPN)

The silver lining in Hawks thrashing