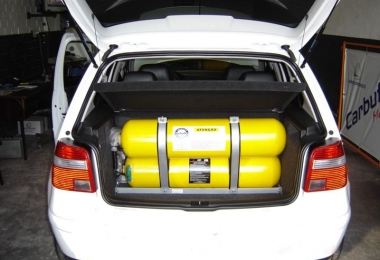 NIPCO Plc has converted a total of 5,600 vehicles in Nigeria to use Compressed Natural Gas (CNG), as one of the company’s efforts at providing access and alternative to motorist to power their automobiles.

Managing Director of the company, Mr. Sanjay Teotia, disclosed this on the sidelines of the recently concluded 11th International Conference and Exhibition of the Nigerian Gas Association (NGA) in Abuja, maintained that the conversion of the 5,600 vehicles were done at the company’s workshops in Benin, Edo State and Ibafo, Ogun State.

Expressing delight to be part of the Nigerian Gas Revolution debate with specific emphasis on the gains, challenges and opportunities; and how it affects the industry and our National development, Mr. Teotia, maintained that the gas sector of the economy has gone through series of legislations including the Gas Master Plan aimed primarily at addressing some of the challenges by way of proffering solutions to boost the economy.

“NIPCO, has since 2009, when it diversified into gas, been supporting government efforts to harness the nation’s gas resources through massive investment in pipelines infrastructure and construction of stations for both LPG & CNG across the nation,” he said, adding; “We have inaugurated nine CNG stations and a compression station to aid natural gas access and utilisation across the country.”

Continuing, the NIPCO boss said: “A total of 5,600 vehicles have been converted to use CNG at the company’s workshops in Benin, Edo State and Ibafo, Ogun State as one of the organisation efforts at providing access and alternative to motorist to power their vehicles.”

“With the inauguration of the compression station at ibafo in 2016 with a total capacity of 300.000 SCMD, gas is now being transported in cascades to other areas not linked with pipelines’ across the country. The diversification of the company’s operations in natural gas has created lots of employment opportunities for Nigerian technicians and thus aiding local content in the industry.”

The company’s efforts in the industry, according to him, “are exposing Nigerians to the latest technology in gas compression and conversion of vehicles. “Continuous exposure of Nigerian technicians to plethora of natural gas projects had provided veritable avenue them to gravitate properly in this very technical aspect of converting vehicles to run on gas.

“NIPCO was able to put to use local content through a consistent and pragmatic policy in the area of human capital development which had even attracted the eulogy of the National Content Development Management Board (NCDMB), and other stakeholders especially in gas projects.”

Saying the “company’s avowed commitment to growing indigenous participation in the CNG initiative revolves around improving Nigerians abilities in a very pragmatic approach,” Mr. Teotia noted; NIPCO has “improved over the years of our operations in natural gas with all our CNG stations and ancillary services manned and maintained by Nigerians. In the realm of construction of pipelines to aid gas movement, Nipco had constructed to date 73 kilometers at the two major stations of Benin and Ibafo.

At Ibafo, 35 kilometers were constructed from Ibafo to Sagamu while 38 kilometers had been completed in Benin. “The main challenges n the drive to increase immensely CNG use as auto fuel lies mainly in the cost of conversion, access to gas and low awareness. In the area of conversion kits, NIPCO had introduced flexible payment terms for prospective motorist wishing to convert to ease payment even as plea is been made to government to reduce import duties on the kits to reduce cost.”

“With regards to access, more CNG stations are on within the Warri – Benin axis, 3 in Warri and 3 in Benin.” In the area of awareness, the NIPCO’s helmsman said; “efforts are in place to improve marketing using various channels of communications while periodic road shows are being intensified to attract more motorists to embrace gas as auto fuel with its attendant benefits.”

Akwa Ibom State Politics: The PDP Defectors — No Worry They Will Return to PDP (Part 1)

25 thoughts on “NIPCO converts 5,600 vehicles from petrol to CNG”