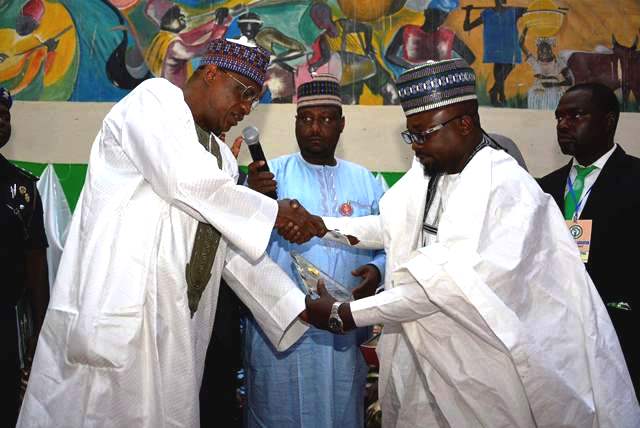 The Nigeria Medical Association (NMA), at its 58th Annual Delegates Meeting and Scientific Conference held in Abuja at the weekend, has honoured Gov. Ibrahim Gaidam of Yobe state for his tremendous contributions to health sector in Nigeria and for spearheading the transformation of healthcare delivery services in Yobe State.

The Outgoing National President of the NMA Prof. Mike Ogrima, who presented the award to the governor, described as ‘marvellous’ and ‘wonderful’ the progress that Yobe state has made under Governor Ibrahim Gaidam, saying the governor deserves commendation for defying challenges to achieve so much.

The NMA cited the broad spectrum of interventions in the healthcare sector that Gov. Gaidam has made, saying that those interventions have improved service delivery and maximise the quality of care across the state.

It will be recalled that the Gaidam administration has built a brand new teaching hospital and a college of medicine at Yobe State University to improve tertiary healthcare and grow Yobe’s own corps of indigenous medical doctors.

Others include major hospitals in Damaturu, Potiskum, Gashu’a and Gaidam have also been totally retrofitted and equipped to make healthcare more accessible and affordable to the people.

“The infrastructure I have seen in Yobe during my visit…The establishment of a new medical college and all the interventions in the healthcare sector are marvellous”, Prof. Ogrima said as he presented H.E Gov. Gaidam with his award plaque.

The public may recall that NMA Yobe State branch and the Society of Obstetrics and Gynaecology of Nigeria (SOGON) have earlier conferred awards on Gov. Gaidam for his strides in healthcare and for improving the health of women and children in the state.

The NMA has also recognised the governors of Sokoto and Taraba States as well as the wife of the governor of Kebbi State, Hajiya Zainab Shinkafi-Bagudu, herself a consultant pediatrician and member of the NMA, amongst others for their own roles in promoting healthcare delivery services in their individual states and the country at large.