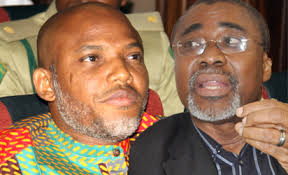 The Federal High Court, Abuja, on Tuesday, ordered Nnamdi Kanua��s counsel, to produce him in court on March 28, or for his sureties to explain his whereabouts.

Justice Binta Nyako gave the order while ruling on an application for adjournment made by the prosecuting counsel, Mr. Shuaibu Labaran. Kanu was admitted to bail on April 25, 2017 and the Chairman, South East Senate caucus, Sen. Enyinnaya Abaribe, a Jewish High Chief Priest, Immanuu-El Shalom and a Chartered Accountant, Tochukwu Uchendu, signed his bail bond. Kanu has however, not appeared in court since his bail and his counsel, Mr. Ifeanyi Ejiofor, repeatedly told the court that his client was in the custody of the Nigerian Army, but the army has denied such claim.

Nyako had earlier granted an application seeking to separate Kanua��s charges from that of the other defendants, Chidiebere Onwudiwe, Benjamin Madubugwu, David Nwawuisi. She granted the application, particularly since none of the defendants raised an objection to it. Labaran told the court that since Kanua��s absence was frustrating proceedings in the matter, justice would be better served if the charges were separated so that the case of the three defendants in court could go on.

a�?In view of the court granting the application to severe the charge of the first defendant from the others, we shall be asking for a short adjournment to enable us tidy our processes and for the records of the court to be neater,a�? he said. Mr. PAN Ejiofor, counsel to Benjamin Madubugwu, attempted to ask the court for bail to enable his client seek medical attention but the judge said she was not disposed to grant bail to any of the other defendants.

She, however, advised the counsel to liaise with the prison authorities saying if they agreed to attache a warden to the defendant, she would make an order allowing him to go to any government hospital. She also adjourned that of the other defendants until March 20. Kanu, the acclaimed leader of the Indigenous People of Biafra (IPOB) and his co-defendants are standing trial on a five -count charge bordering on felony. Some of the charges include treasonable felony, unlawful possession of firearms, unlawful assembly and other offences bordering on their agitation for secession a�Zof the Republic of Biafra from Nigeria.