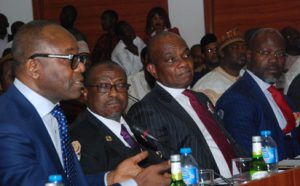 The Nigerian National Petroleum Corporation, NNPC, on Friday, appealed to the Nigeria Union of Petroleum and Natural Gas Workers (NUPENG) to reconsider the 15-day ultimatum it issued the Federal Government over what the union described as lingering labour related issues in the industry.

In a  statement in Abuja, Group Managing Director of the NNPC, Mr. Maikanti Baru, expressed concern over the possible effects of the ultimatum on products supply and distribution chain in the country, stating that NUPENG’s threat could compound the current hiccups in petroleum products supply over which concerted efforts are being taken to bring it under control.

He appealed to the union leadership to exercise patience to enable government address issues over which it had raised an alarm.

The NNPC said NUPENG had, in a release dated 31 January, given a 15-day ultimatum to government over six labour issues between some of its members and their respective companies.

Baru counseled that NUPENG should strive to maintain the harmonious industrial relations that have brought about stability in the industry, reminding its leadership of the criticality of the petroleum sector to the nation’s economy.

Meanwhile, the NNPC said the Petroleum Tanker Drivers, PTD, Branch of the Nigeria Union of Petroleum and Natural Gas Workers, NUPENG, has assured it that it had no plan to embark on any strike action.

According to the statement, the PTD Chairman, Mr. Oladiti Salman, who spoke with the NNPC Group General Manager, Group Public Affairs, Mr. Ndu Ugbamadu, on Friday stated that the purported ultimatum to government by NUPENG over the state of some roads in the Country was a ruse.

Otunba Salman said PTD strongly disowned the statement which had been trending in the social media, saying the misinformation is a calculated attempt by mischief makers to cause panic in the Country.

The PTD Chairman disclosed that his union was on the same page with government having had a parley, Thursday 1st February in Abuja with the Honourable Minister of Works, Housing and Power, Mr. Babatunde Raji Fashola, where he noted comprehensive reports of on-going repairs and reconstructions of damaged highways were discussed.

Otunba Salman explained that at the meeting, the union was reassured by the comprehensive reports of all the on-going repairs and reconstruction of the damaged highways in parts of the country, in addition to the promise of commencement of palliative works on them.

He informed that PTD would continue to champion the interests of its members always.