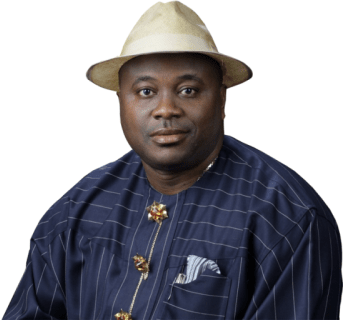 The Senator representing the Akwa Ibom North-East Senatorial District, Bassey Albert, has said no amount of intimidation by the Economic and Financial Crimes Commission will make him abandon the Peoples Democratic Party.

Albert, who is the only PDP senator left in Akwa Ibom, said he was ready to stand by the party through which he won the election, adding that if a similar situation presented itself in future, he would still remain with the party.

The EFCC on Monday filed a 14-count charge at an Ikeja High Court against Albert for allegedly receiving 12 cars worth N254m between 2010 and 2014 while serving as the finance commissioner during the administration of Gov. Godswill Akpabio as bribes from one Olajide Omokore, a businessman, who was equally arraigned on seven counts for allegedly offering gratification and bribes to a public official.

Speaking during a media event on Tuesday in Uyo, Albert noted that it was funny for him to be charged to court on account of his stewardship as a commissioner in the state some three years ago.

He said, “As a commissioner, I reported to my governor. So, if anybody is to be charged to court it should be the governor to whom I reported.

“Today, I’ve woken up to see I’ve been charged to court. I don’t have any business there. My lawyers are ready. But whatever case you are seeing is orchestrated by someone in this state to coerce me into the APC. You can’t tell me if I jump over to APC, all charges will be dropped.”

7 thoughts on “No Amount Of Intimidation From EFCC Will Make Me Join APC: Senator Bassey Albert”