No! Boko Haram Terrorists Are Not Bandits, They Are Buhari’s Boys

No! Boko Haram Terrorists Are Not Bandits, They Are Buhari’s Boys 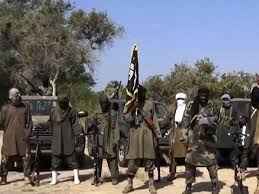 President Muhammadu Buhari on Tuesday attempted to downgrade Boko Haram terrorists by referring to them as “bandits” and saying that they will be treated as such. This is happening about a day after Boko Haram terrorists killed a gallant soldier of the Nigerian army and injured at least 3 others. https://thedefensepost.com/2019/09/07/nigerian-soldier-killed-ambush-kamuya-borno-iswap/

And a week after the terrorists killed as many as 10 soldiers in Gajiram near lake Chad. https://thedefensepost.com/2019/09/05/nigeria-soldiers-killed-gajiram-iswap/

In 2012 we fought very hard to get Boko Haram to be classified as terrorists and have their leaders listed in national and global wanted lists. The Jonathan government finally designated them thus, thereby securing the terrorists and their supporters the full penalties in accordance with Nigeria’s anti-terrorism bill as amended.

Capital punishment to Boko Haram terrorists and their sponsors would be a recourse. Terrorists like Boko Haram are routinely killed in Cameroon, Kenya and other African countries but not in our dear Nigeria.

But worse yet, today Buhari has downgraded or subtly attempted to downgrade the terrorists to “mere bandits.”

The latest in many unspeakable positive moves by the current administration to turn the world’s worst terrorists aligned with ISIS into heroes.

Just last month, the GOC 7th division in Borno, Maj. Gen Abdulmalik Biu unbelievably said Boko Haram terrorists can someday become the president of Nigeria. (Watch: https://www.youtube.com/watch?v=iWHx6zodyDc ) Perhaps one of the most sickening statements to emanate from a government in global history. Terrorists who have killed and raped Nigerians and continue to kill soldiers?

Till date, over a decade after Boko Haram began its reign of terror, not a single terrorist has been sentenced to death by the state as guided by the law. Rather, Justice Binta Nyako under the Buhari administration pardoned and released most terrorists captured by the Jonathan administration on “time spent,” during secret trials.

An illegal and unconstitutional amnesty, code named “safe corridor” was unilaterally granted the evil terrorists by the Nigerian army without the stipulated oversight of the “council of state” as the Nigerian constitution demands. With this love of the terrorists demonstrated by the Buhari government, murderers of police, soldiers and citizens alike and kidnappers of Nigerian students are hurriedly “rehabilitated” and released back into society.

Ironically while the Buhari government shows so much love for demonic Boko Haram terrorists, the same administration aggressively pursues human right activists, journalists, protesting youth and peaceful groups and brands them “terrorists” at will.

Sahara Reporters’ publisher and former presidential candidate, Omoyele Sowore is currently being detained by the nation’s inSecurity services under the guise of “terror” planning. Unlike Boko Haram terrorists who have fought and killed Nigerian soldiers and declared war against the nation, Sowore was arrested for nothing more than fighting corruption and demanding accountability, justice and cerebral leadership from the Nigerian authorities.

In a new era of persecution and terrorism by the government itself, even state governors have followed Buhari in abducting and disappearing critics as is suspected of occurring in Kano as Dadiyatta remains missing after criticizing Gandollar; and declaring journalists and social media critics “terrorists” as is happening in Cross River state right now in the ridiculous state-abducted Jalingo case.

Groups without any notable history of violence including IMN and IPOB have been rapidly branded terrorists and proscribed by the same government that degrades Soldier-killing Boko Haram to mere bandits and refuses to designate as a terror organisations, Gan Allah and Miyetti Allah who have declared support for Fulani terrorist massacres of communities. See terror act confessions of thee organisations: https://www.premiumtimesng.com/news/headlines/200426-exclusive-struck-agatu-fulani-herdsmen.html and https://www.bbc.com/pidgin/tori-42555276

Justice is on its head. Nigeria is being terrorized from Aso rock. The educated and active are fleeing Nigeria in droves, seeking and being granted asylum abroad. Things have never been so bad but what is scary is how much worse things appear to continue to be getting as the psychotic terrorizing Buhari-led administration gets bolder in its protection of “its own terrorists” and the preposterous branding of peaceful protesting youth, right activists and journalists with treason and terror designations.

They will go home in body bags, this government said to openly terrorize foreign election observers from the top seat of its Kaduna wing. It’s a field day for state terror.

Buhari needs to be checked out. It is unlikely he is in a sane and proper state of mind. This is my frank medical opinion.

7 thoughts on “No! Boko Haram Terrorists Are Not Bandits, They Are Buhari's Boys”