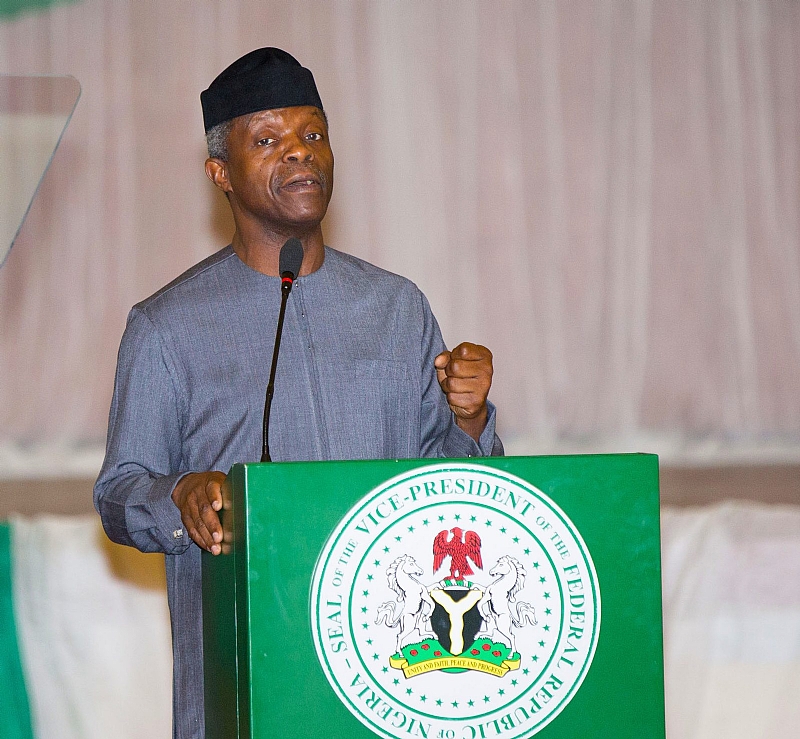 The federal government has decided that there shall not be any forceful acquisition of land for the herdsmen colony plans of the Buhari administration.

a�?Let me reiterate that on no account will any land be ceased or forcefully taken to create any of the ranches or grazing areas, said Vice President Yemi Osinbajo Thursday.

a�?All insinuation to that effect should be disregarded, no one is given land to anyone as it has been falsely alleged in some quarters. Instead, it is our view that states that are willing and have set aside land or those who have designated grazing areas should cooperate even with willing investors into commercially viable government supported ranches or livestock production centers.a�?

The FG a�?cannot dictate to the states what to do with their land according to the Land use Act.

a�?Apart from the states that presented grazing reserves, so far about 13 states have agreed to allocate 5,000 hectares of land for ranching or livestock production.

a�?We must emphasis that in arriving at any of those decisions in the states, the state, federal and local governments have to set together and work out solutions that will benefit everyone.

a�?This cannot be done clearly by fiat, people have to simply work together to ensure that that there is adequate consultations and that everybody is taken on board.

The Vice President Yemi Osinbajo also admitted that with the countrya��s population currently at 180 million and with Nigeria unable to match United Nations recommended one policeman to 400 persons ratio, the Federal Government cannot realistically provide security from the center

He has therefore called for the creation of state police amid increasing security challenges in the country.

Osinbajo spoke at the opening of the Two-Day Summit on National Security organized by the National Assembly Ad-HOC Committee to review the current infrastructure in Nigeria, in Abuja.

Those in attendance were lawmakers from both houses of the National Assembly, the Secretary to the Government of the Federation, Boss Mustapha, ministers, service chiefs and the Inspector General of Police, royal fathers, civil society, diplomats, amos other stakeholders.

The Vice President stressed that state policing system is the way to go because having a centralized system a�� as is currently practised, cannot effectively secure the nation.

He added that for the federal government to continue to provide security from the center it will need a lot resources to increase the number of personnel as well as properly fund all security agencies and their operations.

a�?Thirdly, we cannot realistically Police a country like Nigeria centrally from Abuja, State Police and other community policing methods are clearly the way to go,a�? he said to the applause of participants.

10 thoughts on “No Forceful acquisition of land for herdsmen ranching, says VPOsinbajo”