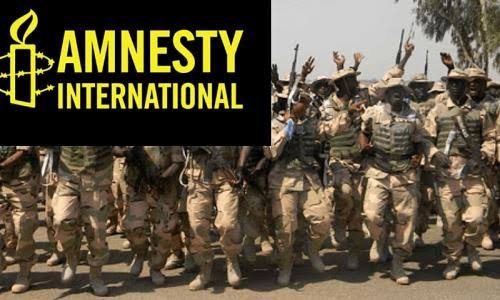 By Ahmed Abu, The Nigerian Voice

The Defence Headquarters has taken note of yet another ill-conceived report by Amnesty International (AI) aimed at disparaging the Armed Forces of Nigeria (AFN) in the fight against terrorism and counter-insurgency in the North Eastern part of the country.

The AIa��s recent allegation that its investigation has revealed sexual assaults in detention facilities at Giwa Barracks Maiduguri and the Maiduguri Maximum Security Prison is only a rehash of its characteristic unfounded and ill-conceived accusations against the AFN.

It is instructive for Amnesty International and their sponsors who may be more interested in the failure of Nigeria in the ongoing fight against terrorism and insurgency to note that these accusations are unfounded and a very poor attempt at dampening the morale of troops of the AFN.

The Giwa barracks detention facility is a national facility, therefore, the suspects or inmates are jointly handled by professional investigators drawn from the Defence Intelligence Agency, Nigerian Police, Department of State Security, Nigeria Immigration Service, the Nigeria Prisons Service and Nigerian Security and Civil Defence Corps. It is therefore, near impossible for these team of professionals to look the other way, while sexual violations are perpetrated as wrongly insinuated by AI.

It is also pertinent to add that the detention facility has adequate representation of highly professional members of International Organisations and Non-Governmental Agencies such as the International Committee of the Red Cross (ICRC) and other reputable NGOs that have unfettered access to the facility and scrutinize its activities from time to time in accordance with international best practices in managing detainees.

While other reputable international organisations in the North East and other parts of the country have been working to bring about enduring peace in the North East, it is rather unfortunate that AI has impenitently chosen a path that seeks to denigrate the AFN, a task it has continued to pursue blindly and tenaciously through its glaring bias reports.

The DHQ wishes to appeal to members of the public and the international community to discountenance AIa��s malicious report and continue to give requisite support to the AFN in the fight against terrorism, insurgency and other forms of criminality in the country.

In another development, the Honourable Minister of Defence (HMOD) Mansur Dan Ali has called on Chiefs of Naval Staff of Nigeria and Pakistan to maximize the opportunities of existing bilateral cooperation in order to tackle national security challenges particularly in the maritime domain. The Minister made the assertion this morning during the visit of the Pakistani Chief of Naval Staff (PCNS) Admiral Zafar Mahmood Abassi to the Defence Headquarters, Abuja.

Represented by the Chief of Defence Staff (CDS), General Abayomi Gabriel Olonisakin, the Honourable Minister of Defence noted that both Countries have a long standing bilateral relationship with shared security threats ranging from terrorism to maritime threats.

Mansur Dan Ali further observed that the envisaged bilateral cooperation between the two Navies would be beneficial to the countries towards building capacity for operational efficiency.

Speaking earlier, the PCNS, Admiral Zafar Mahmood Abassi who is on a two day working visit to the Nigerian Navy, said his country places much value on her relationship with Nigeria, stressing that there are opportunities for both countries to collaborate in developing military synergy, with emphasis on the Navy

Accompanied by the Chief of Naval Staff Nigeria, Vice Admiral Ibok-Ete Ibas, the PCNS remarked that he is in Nigeria to discuss measures for mutual cooperation needed to strengthen both Navies in tackling maritime security threats.