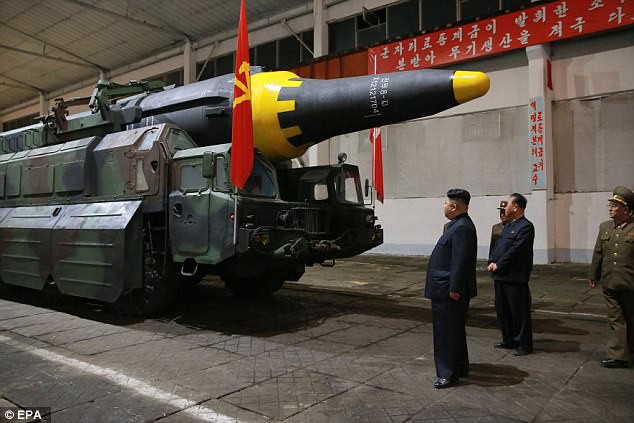 North Korea has fired a mid-range ballistic missile just a week after its latest launch, Seoul officials have said.

The South Korean defence ministry could not immediately identify the weapon which was fired 310 miles (500km) on Sunday afternoon from a location north of Pyongyang.

But a White House official confirmed Kim Jong-Un had test fired a medium-range ballistic missile, despite threats of tougher US sanctions over its missile tests.

The official, speaking from Saudi Arabia where President Donald Trump is on a visit, said: ‘We are aware that North Korea launched an MRBM.

‘This system, last tested in February, has a shorter range than the missiles launched in North Korea’s three most recent tests.’

North Korea has defied all calls to rein in its nuclear and missile programmes, even from China, its lone major ally, calling them legitimate self-defence.

It has been working to develop a nuclear-tipped missile capable of striking the US mainland.

North Korea’s state KCNA news agency said in a commentary on Saturday: ‘Today the US mainland and the Pacific operational theatre are within the strike range of the Demographic People’s Republic of Korea (DPRK) and the DPRK has all kinds of powerful means for annihilating retaliatory strike.’

It is the latest in a string of launches by Kim Jong-Un as the nation steps up its aggression on the Korean peninsula.

The test ‘represents a level of performance never before seen from a North Korean missile’, John Schilling, an aerospace expert, said in an analysis on the US-based 38 North website.

‘It appears to have not only demonstrated an intermediate-range ballistic missile (IRBM) that might enable them to reliably strike the US base at Guam, but more importantly, may represent a substantial advance to developing an intercontinental ballistic missile (ICBM).’

Last week’s missile was deliberately fired at the highest angle to avoid affecting neighbouring countries’ security, but had it been launched at a standard trajectory, it would have reached at least 2,500 miles (4,000km) – almost half the 5,500 miles (8,851 km) required to reach the US mainland.

Today’s launch was North Korea’s 10th this year, after dozens in 2016, as it accelerates efforts to develop an intercontinental ballistic missile (ICBM) capable of delivering a nuclear warhead to the continental United States – something President Donald Trump has vowed ‘won’t happen’.

I Feel Ashamed As A Nigerian Each Time I Travel Abroad, Says Don Jazzy