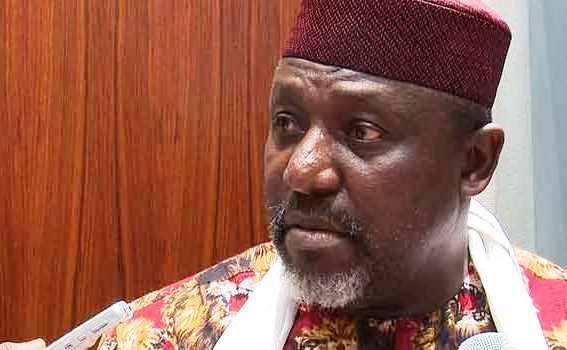 Very quickly these are not the best of times for my friend and brother, Owelle Rochas iScAriot Okorocha, the outgoing Imo state governor and copyrights owner of the word “Iberiberism”. I humbly request permission to use his word, believing he has benevolently granted it.

Last week, I addressed a concerned on a nation and a people that are divided, this week my admonition is taken from one I spoke about six years ago, as again the flakes are thrown towards the north, while we sought to find answers to the puzzle of restructuring.

My admonition this week dwells with a section of Nigeria–the North and it is a do-no-favors essay, call it the truth, or falsehood, call it nonsense, be bitter or be complimentary about it, I really do not care–or better still I care enough to tell us the way I see it.

The words of Malcolm X sum up my next few paragraphs. “You're not supposed to be so blind with patriotism that you can't face reality. Wrong is wrong, no matter who says it.”

Take it to the bank, you did cash money, Nigeria is divided because…

The myth–Aboki is supposedly an Hausa term that is used to describe the man up North, he may be hausa, nupe, berom, fulani, shua, but largely he is ignorantly Hausa to all and poor, he is either mai-guard (gateman), mai-ruwa (water), mai shai (tea), mai-doya (yam), mai-reke (sugarcane), mai-miaa (blackmarket fuel); whatever he is, he just has to be mai-something or mai-everything. He is a symbolism today to other Nigerians of violence and false face of Islam. Some don’t even know there are Fulani or Hausa Christians. He is 'misunderstandingly' understood.

Then we have the Alhaji, he is everything above except that he is presumed rich, and in recent times dangerous too, he could be a sponsor of Boko Haram too, but for a 'typical' southerner, there is the allure of his riches whether via politics, oil, or 'voodoo' who cares. He is there in Abuja, Port Harcourt and Lagos. He really doesn't care about his North; he is a hypocrite to the core without his knowledge.

His Iberiberism has left a region on her knees, no other time than now has the North faced an identity crisis and fight within herself. Who are the Hausas, who are the Fulanis, and how about the Hausa- Fulanis, what really is the place of the Islam North, real, media creation, how about the Christians in the North?

Is the North still united, as was the case, what about her oligarchy and a few leftist socialist activists that set the talakawa agenda, what happened? What is it that needs to be understood about the alamanjiri system and institutional begging in the North?

And before we scream, has the North been this violent, is it really about marginalization and if indeed, who marginalized who, Abacha, Shagari or IBB, it certainly should be Buhari, did you not see the rickety school were he cast his vote or how come there’s no ‘sweet’ public secondary school in Atiku’s local government?

The North and the agitating Middle Belt is an emotional wreck, a perfect picture of an abused bride, which today is even afraid of a hug of reconciliation, with rehabilitation and reconstruction from the ruins of Borno, a far cry.

Go to Zamfara and see a budding Northeast in the making, the town has become a quasi jungle state, gun wielding vigilantes, how about the sacrificial alters in southern Kaduna…

If the North decides to go away from Nigeria, will the other component part fight to keep it and would it be really 19 states, is Plateau North, when there's no love lost between the Plateau people and the North, does Taraba believe in North, Southern Kaduna, parts of Nassarawa, Benue, Kogi etc?

People still believe that up North we are all empty land mass and goats, unproductive, and leeching termites stuck on Nigeria because of the oil, if not, why the hue and cry of PIB when Zamfara's mines are gold for the asking and we could develop a self-sufficient and exportable agrarian community?

What is the arewa ideology, did it or does it exist, my girlfriend from Southern Kaduna dislikes El-Rufai, her community see him as Hell-Rufai, truth is, he’s something that they are not—are they North? They don’t share ideology even by subsets; tell that to the birds though.

Everyone is on a blame ride, the bulk stops at Buhari’s table, but as 'Northerners' have we blamed our 19 non performing state charge de affair, and Ministers, legislators, and their ilk, what examples have they set?

So much is wrong with the North–I challenge my brothers from Katsina/Jigawa/Kebbi/Zamfara etc to tell me two companies that make 30 million naira a month after salaries are paid and utilities are sorted.

The economy of the North has crumbled due to insecurity unleashed on the region by Boko Haram amongst other allies, a huge army of unemployed youths in the North pointing out that there was urgent need for the revival of the Northern economy and job creation. But how are we doing that, other than holding power and our usual it’s a birthright mentality.

How many Ashaka/Larfarge cement companies do we have in the North, NASCO in Jos is dead, funeral rites only being delayed baring a miracle, same for the Kaduna textiles industry and her likes.

What and where have the trillions of 20 years of democracy gone to in the North? Universities out of private initiative litter the South and up here what are we doing, arguing who has suffered more casualties between Christians/Muslims.

Okay it has to be poverty, that's one ideological school of thought for the bloodbath and mayhem, even Obama thinks so, I agree only to the extent that really… “Countries are not delivering for their people and there are sources of conflict and underlining frustrations that have not been adequately dealt with”. In this case, the North has failed herself.

The North has equally failed…“to give her people opportunity, education and resolve conflicts through regular democratic processes,”

… “In terms of human capital and young people, I think the greatest investment any country can make, not just an African country, is educating its youth and providing them with the skill to compete in a highly technological, advanced world economy”. Nigeria has failed in this regard and the North has woefully crashed in same vein.

The North will rise again, how, if I may ask, by Buhari presidency that includes a wholly Northern apparatchik or our famed population

The Southwest despite Tinubu's crookedness is chasing a semblance of regional integration; the South East and South-South are not left out. States have even gone ahead to show/use their emblem/insignia and are creating identities. We are still seen as Fulani herdsmen asking for reserves on other peoples' lands and seeking nomadic education because we can't do regular school.

We need to bash ourselves, the North, with or without the belt at the middle, her framers, herdsmen and women, Christians, Muslims and pagans, needs to stop lying to itself and her people, there are current realities, where do we fit into it?

I will end this admonition in the words of one of the problem sons of the North, Bro. TY Danjuma, “We need to think more, pray more, plan more, work harder, RELATE BETTER, and talk less. Battles are better fought and won through wisdom and strategy than through inflammable pronouncements and political tantrums.” This is to the North but it does apply to Nigeria, the current hate quotient is high–for how long, only time will tell.

Now Selling Our Airports To the Cabal: Has Buhari Run Out of Ideas?

Nigeria is Just A Jungle

253 thoughts on “North of Nigeria and Iberiberism”