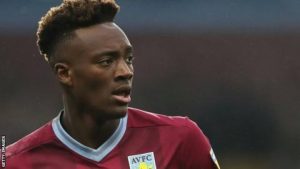 Tammy Abraham began the season as Chelsea’s third-choice striker, behind Álvaro Morata and Olivier Giroud, but while he featured as a substitute in the Community Shield, he came nowhere near playing in the first three games of the season. Wisely, he thus decided to head out on loan, in search of playing time.

The decision to drop back down to the Championship with Aston Villa was greeted with some trepidation — he had already proven himself at that level two seasons prior, after all — but the 21-year-old made good on the choice by scoring a career-high 25 league goals and leading Villa back into the promotion playoffs, and maybe even the Premier League depending on what happens in tonight’s final against Frank Lampard’s Derby County.

While Tammy fell 5 goals short of his stated 30-goal target, it’s hard to be disappointed with the total, especially when we consider all the other qualities he’s shown, including but not limited to taking massive penalties under pressure (like the one to win the playoff semifinal against West Brom) and adding a physical edge to his game to go with his size and skills.

“It’s been a successful season. I came here with things in mind to do: score goals, and help take a team all the way to the play-offs. That’s what I have done so far.

“The main [area of improvement] has to be hold-up play. Coming into a league where it’s very physical, and there are very good teams in the league as well, sometimes the only option is to be a target man. I have been that target man for Aston Villa, even though growing up at Chelsea you’re not really a target man at a young age! You mostly have the ball on the floor. I have taken that into my game. Because of my height and my appearance sometimes I have to become a target man. It’s something I have had to improve on and I think I have done.

“I have enjoyed it. I like to be physical sometimes. I grew up watching Didier Drogba, more recently Diego Costa, and learned how the best use their body and their brain. I like that. It’s not just ‘nicey nicey’ football — sometimes you have got to show the rough side of you as well, and show your strength. I’m a strong lad and I have to use that.”

Outside of a couple seasons, neither Drogba nor Costa were the most consistent goalscorers, but even if they didn’t score, they could single-handedly win matches on any given day just by their sheer presence on the pitch. If Tammy can develop into a similar force of nature, we’ll be sitting on a goldmine.

And of course it’s not just about physical strength and brute force.

“I have [also] been working on my finishing, different types of finishing, one-touch, two-touch, heading. Surprisingly heading wasn’t my best attribute but I have worked on that in training and it’s paid off as I’ve got a couple of headers.”

If that sounds like a type of striker that Chelsea could use, Tammy’s right there with you.

“Yeah, [my goal remains playing for Chelsea]. That’s the team I have grown up playing for and I have been at since the age of seven. Making my Chelsea debut was a dream come true, and I want that feeling again and again. That’ll be the aim, and fingers crossed I will achieve it.”

As things stand, the situation couldn’t be more perfect for Abraham to come back and make his mark. If the transfer ban stands, Chelsea will be forced to look towards the youth for fresh blood. Even if the transfer ban is suspended, preferred targets such as Luka Jović could be prohibitively expensive. Giroud may have signed on for another season, but Higuaín looks to be leaving and he could be taking Sarri with him to Juventus, even. But regardless of what happens with the head coach, Tammy is ready-made to step up and needs to be given the chance to do so.

11 thoughts on “Not just 'nicey nicey' football: Tammy Abraham aiming to be Chelsea's next Didier Drogba or Diego Costa”