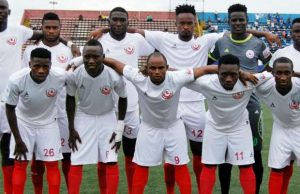 Ifeanyi George scored for Rangers in the 28th minute after utilising Ajani Ibrahim’s low drive in the match played at the Ondo State Sports Complex.

All efforts by the home team to score another goal and secure a win in the second half proved abortive as the visitors defended well to keep the scoreline at one-all.

Rangers, head coach Gbenga Ogunbote, while speaking after the match, said the home team was a good side.

a�?But our team is still in the making and I believe we are still going places this season.

a�?However, Sunshine Stars are just like any other team we have played. We have been on the road for the last two matches, and it will not be good if we cannot pick at least a point on the road,a�? he said.

Raji, on his part, rued his team’s missed scoring chances, lamenting that luck was not on their side.

a�?But we will make amends when we travel to Omoku to take on Go Round FC on Match Day 12,” he added.(NAN)

Kane’s milestone as Spurs stay in hunt with rout

15 thoughts on “NPFL: Rangers earn away draw at Sunshine Stars”