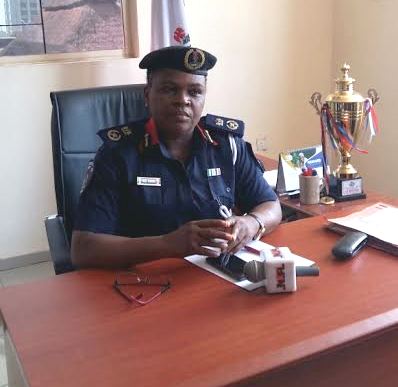 Delta State Commandant, Nigeria Security and Civil Defense Corps (NSDCD), Commandant Sam Ego Ezeagbogho, has assured members of the Indigenous Correspondentsa�� Chapel (ICC), of the Nigeria Union of Journalists (NUJ), Delta State Council that the Command under her watch would collaborate with journalists.

Commandant Ezeagbogho, gave the assurance Tuesday during a media parley by the leadership and members of ICC at the NSCDC Headquarter, Asaba

She said the request for a robust synergy would not be played down, a�?because without you, we really cannot reach the communities, we cannot reach the population and the people out therea�?, stressing that the Commandant activities could only come to forefront through the instrumentality of the press.

The NSCDC boss also assured the group of the Commandanta��s assistance where possible, stating specific areas where ICC needs them to intervene should be made known to them, a�?I am sure you will be impressed as to how we will address ita�?.

Fielding questions from members of ICC, she said personnel deployed to ensure that the just concluded local government election was crises free brought their wealth of expertise to play as the strategies mapped out for the election by the security outfit worked out perfectly.

a�?It will interest you to know that a media, African Peoples Voice were here in this Command to commend the nature with which we were able to monitor the election and carry out our mandatea�?, revealing that after the evaluation, a�?they gave us award. They say we have no match, so that is to tell you that we performed excellently wella�?.

She noted that the award would not get into their heads; rather it would spur the Command to do better in similar assignments.

According to her, the major alarming crime in the state is pipeline vandalism but stressed that the command over the years has drastically reduced the act to the barest minimum.

a�?the importance attached to prayers in all its activities a�?for if God does not watch a city, the watch mam watcheth in vain. Our efforts and success in combating crime and other disturbances in the state is largely because of prayers and synergies with other security agencies,a�? she added.