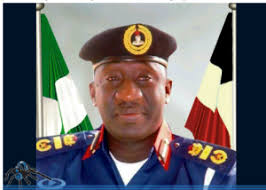 The Commandant General of the Nigeria Security and Civil Defence Corps, Abdullahi Gana Mohammadu has expressed regrets over the ugly incident that occurred at one of the beats, where personnel of the Corps were deployed to protect the infrastructure of the Lagos Deep shore, Offshore logistics.

The Corps boss expressed this in a briefing of the Management team of the Corps, at the Headquarters, Abuja stating that an ugly incident occurred as a result of an accidental discharge by a Personnel of Corps which led to some casualties involving another Personnel of the Corps and Kurean who is currently receiving treatment at the hospital.

Gana said he received the information with a heavy heart, and in view of that he commiserates with the family of the deceased and the injured. Expressing rude shock at the incident despite various warning by Management against such act of negligence and carelessness. He went further to assure the public that adequate punitive action shall be taken against the officer involved on this act in order to avert a reoccurrence of such incident and to serve as a deterrent to other personnel