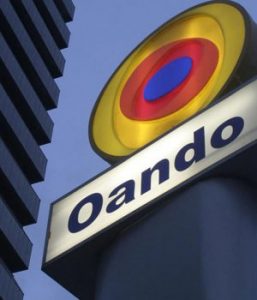 Oando plc could now take a deep breath as peace has been brokered in the ensueing conflict between it and a key shareholder, Dahiru Mangal. The deal include among other things a board appointment for Dahiru or a representative, the oil company said on Monday.

The oiloutfit has been in a drawn-out conflict with Mangal, who petitioned Nigeria’s Securities and Exchange Commission (SEC) last year, alleging financial mismanagement at the firm.

The SEC has ordered a forensic audit into the oil company’s shareholding structure citing concerns about possible insider trading.

The conflict also led to the suspension of Oando’s shares on the Lagos and Johannesburg stock exchanges. They have been suspended at 5.99 naira each for more than three months.

Oando said Mangal has officially notified the company that he is a substantial shareholder, owning more than 10 percent of the firm’s shares.

The oil company said it was open to shareholder oversight and would encourage Mangal to exercise his rights in order to better understand the company’s business. It added that the Emir of Kano mediated the conflict resolution, which ended on Jan. 7.

Responding to the development, Dahiru Mangal said:
a�?Following the clarification I have received from Oando’s management team, I have withdrawn my petition to the SEC,a�?.

a�?I am confident in the company’s leadership team and trust that with the right support it will continue to grow from strength to strength, returning real value to all its shareholders including my good self.a�?