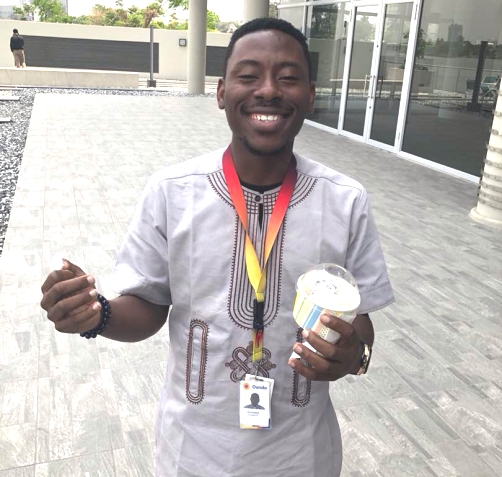 It is no secret that youth unemployment is one of Nigeriaa��s biggest challenges. The 2014 dip in the global oil price, triggered one of the largest economic crisis Nigeria has ever seen. As Oil & Gas is the countrya��s main export and largest source of revenue, the ripple effect of the fall in oil prices has resulted in lower foreign exchange reserves and a further slide in the stock market prices of several Nigerian companies. With over 500,000 youths being inducted into the employment pool annually and less than 250,000 jobs available, the youth of today are learning that it takes a lot more than a good university degree to secure employment in Nigeria.

Olayinka Fajimitea��s story embodies the bold, audacious and fearless spirit that Nigeria requires of its youth today. His story started off in October 2016, he was a a�?huge fana�? of Oando Plc and had been following their social media platforms for a few months when he decided to take a shot and tweet at them. He bravely tweeted a�? @OandoPLC, how many Retweets to get employment at Oandoa�?, and to his surprise, the company responded saying a�?Unfortunately, we dona��t do retweets for employment, but for 2000 retweets we can offer you a 1-month internshipa�?. In Olayinkaa��s words a�?I was completely stunned that they had replied and even more stunned at the opportunity – this was my dream company, giving me a shot on twitter! I couldna��t believe ita�?. He quickly found the support of others on Twitter and managed to hit over 3,000 Retweets! His story was so profound that it got recognized by Oandoa��s Group Chief Executive, Wale Tinubu who then tweeted a�?Well done Olayinka, your audacity is truly laudablea�?.

Olayinka began his internship at Oando on the 12th of October and even though it only lasted a month, he left such a strong impression that the company nominated him for a full-time role a year later. a�?I couldna��t believe my luck, it really is unheard of in Lagos today, to have gotten a job in the most unconventional waya�?. He interviewed with 5 other applicants and was selected for the role, which he began in January 2018.

Olayinkaa��s story takes us to a quote from Steve Jobsa�� 2005 commencement speech at Stanford University where he quoted the farewell message placed on the back cover of the 1971 edition of the Whole Earth Catalogue: “Stay hungry. Stay foolish.a�? Where he encouraged the youth to think outside the box and be as imaginative and innovative as they can be.

Congratulations Olayinka! Wishing you all the best at Oando!

Tertiary Institutions' workers should bear with us for the time being- Osun Govt.