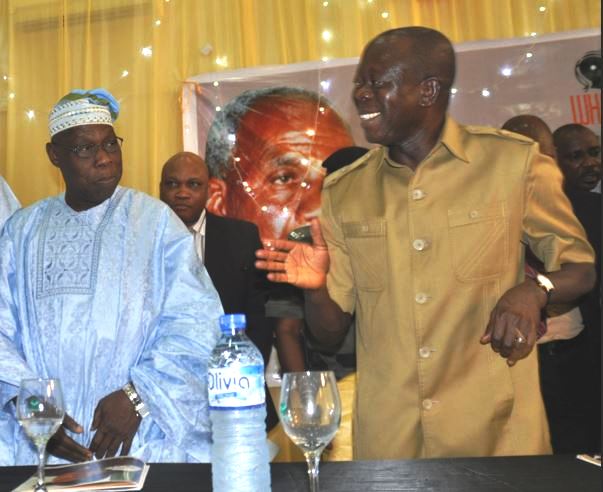 The National Chairman of the All Progressives Congress, Adams Oshiomhole, has asked former President Olusegun Obasanjo to remember he swore that God should punish him if he ever supported Atiku Abubakar to be president.

Oshiomhole spoke after receiving APC women leaders from Edo State and Abuja, who paid him a solidarity visit in his office in Aso Drive, Abuja.

He said the country could not afford to return to the era where owners of private jets had business addresses but just because they had connections with the Nigerian National Petroleum Corporation or the likes.

“We know there are people across the divide who are fighting back. There is a gang up by those who are used to sucking the system without adding any value but Nigerians will not allow that,” he said.

Oshiomhole boasted that the 2019 election would be a smooth sail for President Muhammadu Buhari and the APC because ethnic and religious sentiments that characterised the 2015 election lost by former president Goodluck Jonathan would have no place this time around.

“The two candidates are from the North and they are both Muslims. People are now going to look at the character. Nobody has ever say Buhari is a thief. But who said the other person is a thief? it was his boss.

“When you are working with me and I said you are a thief, God will punish me if I support you. And when you are confused because your supply line has been chopped off, you now turned around to support the same person. That God that you called with your name to punish you if you supported the person is about to go to work. And HE will go to work in February and HE will punish him thoroughly and the person he is supporting, in favour of Nigeria.”