Obasanjo praises Atiku, says he’s someone who carries out responsibilities with dignity

Obasanjo praises Atiku, says he’s someone who carries out responsibilities with dignity 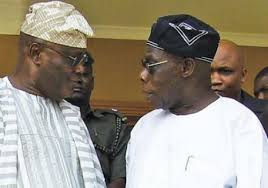 Former President Olusegun Obasanjo has praised the general comportment of  his former deputy, Atiku Abubakar and presidential candidate of the Peoples Democratic Party.

Obasanjo at the turbaning of Atiku as the seventh Wazirin Adamawa by the Lamido of Adamawa, Dr. Mustapha Barkindo, said his former deputy  will carry out any responsibility he is given with dignity.

The PUNCH reports that Obasanjo said by every standard, Atiku had always been a “cultured and a cultural person.”

“When we were in Abuja and dealing with the affairs of governance, you did not take lightly cultural affairs back home. By every standard, you are a cultured and a cultural person. Whatever responsibility you have at the national and international level, I know you will carry this new office with respect and dignity,” he said.

According to the report, Atiku said on his part,he would ensure the relevance of traditional institutions in the country by promoting their values and principles to the rest of the world.

He said he would not relent in promoting and advancing the cause and principles of Adamawa Emirate and traditional institutions in general in the country.

Atiku, who referred to Obasanjo as his  boss ,thanked  the ex-President for his contributions to his mentoring.

Atiku who appreciated the title of Wazirin, which made him the second in command in the Adamawa emirate, said he received the title with humility.

“Your royal highness has now given me the highest honour available to anyone from a modest  background   and achievement. The late Lamido HRH Aliyu Mustapha, may his soul rest in peace, appointed me Turakin Adamawa at the age of 35, making me a confidant and council member of the emirate. As his successor, you have accorded me the second highest position which I am receiving with profound humility with my turbaning as Wazirin,” he added

The Lamido Adamawa said Atiku was honoured because of his contributions to the development of Nigeria in general and, particularly Adamawa State in particular.

“Atiku has also contributed greatly to unifying the people of Adamawa and providing useful advice to the emirate,” he said.

“The position of Wazirin, which is the highest in the council puts him in charge of administration of the emirate and is given to people who are educated, honest and God fearing. It’s not hereditary and can go to anyone who deserves it.”

Barkindo advised all other traditional title holders to cooperate with the new Wazirin.

Former governors such as Attahiru Bafarawa of Sokoto;  Rabiu Kwankwanso  (Kano), and Boni Haruna, (Adamawa) were also at the event, which was also attended by serving and former members of the National Assembly.

Earlier while observing protocol, Obasanjo set the crowd reeling with laughter, after he recognised former President Goodluck Jonathan, as his colleague. He turned to Saraki, saying, “Senate President, you cannot say this one is not my colleague.”

According to the newspaper, the palace located in the heart of the ancient city, was brimming with a huge crowd of people made up of politicians, traditional rulers, military and paramilitary personnel, local musicians, vendors of various items and more.

It added that one of the early callers at the Lamido’s Palace is the former national chairman of the Peoples Democratic Party, PDP and a political associate of the celebrant, Alhaji Bamanga Tukur. As early as 8.00AM local time, men of the Nigerian Police and the Federal Road Safety Commission, FRSC team up to control the flow of traffic to and from the Yola residence of the PDP Presidential flag bearer.

9 thoughts on “Obasanjo praises Atiku, says he's someone who carries out responsibilities with dignity”