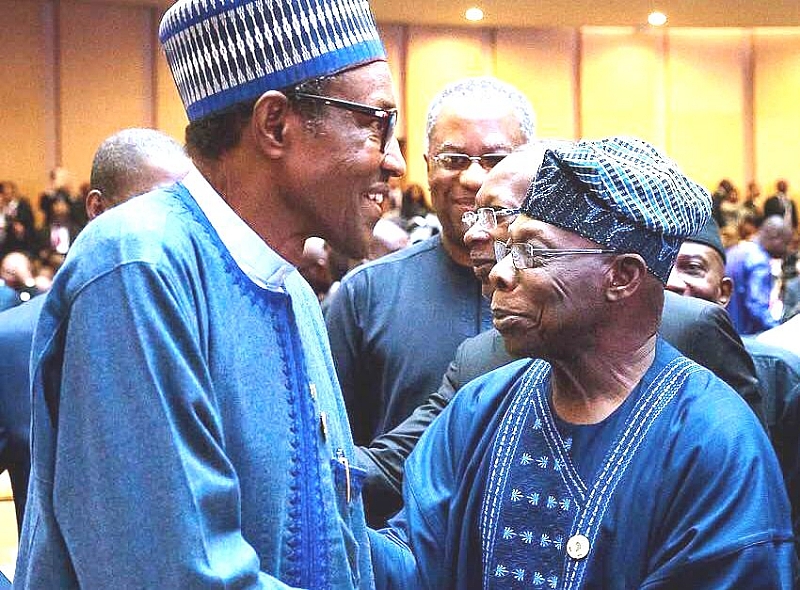 I am, assuredly, one of the admirers of the political neo-classism of the former President of Nigeria, Chief Olugegun Obasanjo. He is great, indeed, in understanding the niceties of Nigeria and Nigerians to the best of his humanly ability. Some patriots respect him for his result-oriented calculations and proving, to an extent, of being the political oracle in Nigeria since he left office as the President of Nigeria, against his will, on May 29, 2007. Like the octopus, he predicted correctly who succeeded him in 2007, though with an interior motive that manifested soon after he installed his personal choice as the president of Nigeria.

Four years later, precisely in 2011, he predicted correctly as against popular contenders for the first citizen. He ensured that his personal choice was again installed. But in 2015, probably seeing the hand-writing on the wall a�� being a student who believes in theological letter writing, he joined the a�?prophets of Goda�� who predicted correctly who became the President of Nigeria. Like in competitions, it is on record that the octopus often errs. Even the a�?prophets of Goda�� often predict wrongly, though their hypnotized followers cannot see the errors of their so-called prophets.

Chief Olugegun Obasanjo, alone, is a political block in Nigeria and a no-nonsense political gladiator in Africa. He has mastered the continental political art so much that from his Ota residence, he dishes out his political concerns/interest in words in forms of letter writing, press statements or even pamphlets to any political figure in Nigeria and beyond. And he often does so at a time when his action can spring up serious debates amongst the people.

Of recent concern is his letter to President Buhari, dissuading reelection interest in 2019 and seeking for a coalition of political parties to ensure victory against the ruling All Progressives Party (APC) and the opposition, the Peoples Democratic Party (PDP). Some political bigwigs including seven governors and twenty senators have reportedly signed on to this new coalition.

But my greatest worry is about the Igbo nation and its long thirst to taste the position of the president since the Biafra war, nearly 50 years now. On this note, I use this medium to sound a warning to my people. They must not be deceived by those trying to divert their target in 2023. Although it is not good to put onea��s eggs in one basket, the Igbo should have learnt their lesson and carefully study the past and present political underpin. They must not allow the political tide throw them far away into the deep sea again.

That is why when people like Femi Fani Kayode, Ayo Fayose and our political oracle Chief Obasanjo claim to love the Igbo, I see something fishy. When there was the intense need to free IPOBa��s Nnamdi Kalu, Kayode did not sign as surety. The trouble Senator Enyinnaya Abaribe is undergoing for Kalu was foreseen but ignored. Fayose himself has declared to run for presidency in 2019. And Obasanjo wants all the old faces in Nigeriaa��s politics to join hands to form a new party that will definitely not present an Igbo Presidential candidate. One is dumbfounded at the magnitude of love the trio have for the Igbo and their concern over the possibility of an Igbo president in Nigeria soon.

And the oracle talks about a�?rescuinga�? the country from a system he lorded over for eight years. Titling his non-exhaustive letter a�?The Way Out: A Clarion Call for Coalition for Nigeria Movementa�?, Obasanjo claimed that President Buhari has performed far below expectation just as he alleged that neither the APC nor the PDP has the solution to the country’s challenges. However, it should be recalled that Obasanjo was called to contest when PDP was already formed, though he became the party leader. APC was formed, not by his might, but he contributed greatly in weakening the PDP which he knew very well.

Obasanjo, in 2013, wrote an 18-page letter to former President Goodluck Jonathan. One of the major online news outfits captured the scenario: a�?A frustrated Nigerian ex-President Olusegun Obasanjo has written a critical letter to President Goodluck Jonathana�?. In that letter, he accused Jonathan of ineptitude and of taking actions calculated at destroying Nigeria. Nigerians have, thus, been divided over this method of letter-writing in advising a sitting president. Some have claimed that Obasanjo wants to destabilize the Buharia��s administration. Others believe it is the right way in order to create public awareness and participation.

Even Obasanjoa��s daughter, Sen. Iyabo Obasanjo-Bello, can confirm his fathera��s past family relationship as manifest in her letter written in 2013, though according to her has been overturned by events. In her four-paragraph statement in response to critics of her fathera��s letter to Buhari, she urged the administrationa��s agents to benefit from the advice and admonishment of her father whom she describes as one of the most brilliant leaders to ever emerge in modern Africa.

Reactions have trailed the letter. The best of responses and story titles over this burning matter were that of the Minister of Information, Alhaji Lai Muhammad and that of Vanguard Newspapers with the caption: a�?Lai Muhammad schools Obasanjo on Buhara��s performance.a�? Lai proved his worth for the job. He knew that Obasanjo has gone beyond the boundary. Yet, he knew the worth of Obasanjo as an elder statesman of national and international repute who deserves respect, knowing that old men can err even while admonishing or expressing concerns over serious matters. Lai has proved political ranking far above the likes of Okukpe, Fani-Kayode and even Labaran Maku who merely sought relevance than sagacity in handling national matters. I was quite captivated by Laia��s response.

But something, though awkward, is glaring. The gentleman agreement derived from different party constitutions, especially the PDP and APC, is the zoning of the presidential slot, including principal offices, between the north and the south a�� the political dichotomy that has killed merit and commitment in governance. The north has three sub-zones as well as the south, though that of the south is made complex with the existence of two major ethnic nationalities therein.

That is how the PDP managed its 16 years of leadership with the south ruling for 14 out of the 16 years. In 2015, the north got the presidency and by the guarded agreement would want to have its eight years uninterrupted. This can only be possible if a second tenure is given to President Buhari. But by any other means, if any northerner under any party, takes over in 2019, the possibility of the north having 12 years may not be overruled because the new president will seek for a second tenure. With that, the south west may fight and grab the position afterwards because the Igbo would have lost again. Could this be the calculations against the Igbo?

I must warn the Igbo to be very conscious of being distracted from the 2023 focus. That is how it begins. Obasabjo may have an interest that is not Igbo in the future regime. It is on record that the governor of Gombe state, Alhaji Ibrahim Dankwambo, is the only loyal governor to the PDP among the Muslim dominated states of the north, though performing. Former governors Rabiu Musa Kwankwaso, former Speaker, Rt. Hon. Aminu Waziri Tambuwal and a few others, are very good aspirants for future President of Nigeria. Obasanjo is, indeed, a political master game planner and executor. His influence can never be underestimated. But the doubt remains if he can maneuver the political scene as he wishes in 2019. And what the Igbo can take home later, if they believe in him. Shine your eyes, my Igbo people. I rest my case.

Stella Oduah: Women Take The Lead In Voting But They Are Not Empowered To Be Voted For. How Legislation Can Fix That

Allegory of a Waterlogged Country

29 thoughts on “Obasanjoa��s letter and Igbo presidency in 2023”