Of Nigeria’s Vice-Presidential Debate: The Pregnant facts and the sweet talks

Of Nigeria’s Vice-Presidential Debate: The Pregnant facts and the sweet talks 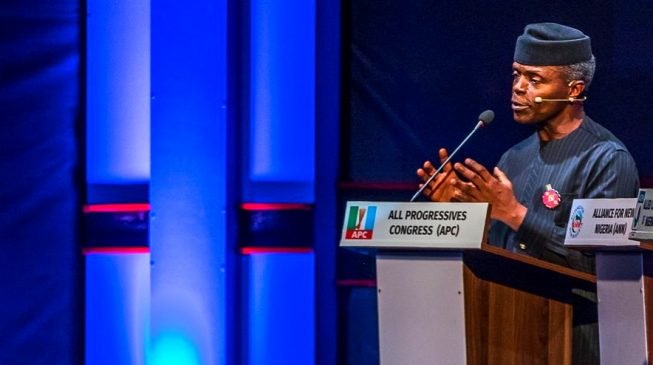 In 1946, George Orwell identified a problem in his classic Politics and the English Language, he explained that a political language “is designed to make lies sound truthful” and consists largely of “euphemism, question-begging and sheer cloudy vagueness.”

Last weekend, Nigeria's social media sphere was agog with vile commentaries over the vice-presidential debate ahead of the 2019 general elections which was organised by the Nigerian Election Debate Group (NEDG) and the Broadcasting Organisations of Nigeria (BON). While some of the aspirants were chastised, some lampooned and others got tongue-lashed.

Vice-President Yemi Osinbajo of the All Progressives Congress, Peter Obi of the People's Democratic Party, Khadija Abdullahi-Iya, of the Alliance for New Nigeria, Ganiyu Galadima, of the Allied Congress Party of Nigeria and Umma Getso of the Young Progressives Congress all presented their various views concerning wide range of topics analyzed at the debate thereby calling the shots to hash issues out for the job in public view.

However, with the forgoing narrative, this debate has indeed triggered up a very huge' suspense' – which is one of the bedrock of a good story line with so many path of expectations coupled with a build up of tensions as the plot unwinds especially ahead of the presidential debate next year and the 2019 polls.

It's quite ridiculous that our dear politicians have simply weaponized lies, deceit and propaganda just to continue glowing in their show of acceptability while some of the hard-minded supporters, vendors of the rumour mills and social media fabricators have been trying to change the narrative which has not made any difference.

Facts mingled with half-truths and untruths to create factitious informational seems to be the current drive by our politicians in this speculative politics because it has become clear that it's very hard to believe what politicians say these days. As Observed, Peter obi was theoretical, gave out fashionable solutions but he masked of his debate with extraordinary figures which became an issue of 'fact-checking' while Prof. Yemi Osinbajo was able to sail through because of his immediate experience.

However, with the 2019 elections already gaining momentum, individuals with an ounce of notoriety always want have an opinion on politics. Even those with little credibility will make vague statements, sweet talks just to simply endear themselves to the public, forgetting that when they had a chance to do what they currently feel is the obvious, they didn’t, all for their own selfish reasons.

The saddest part is that Nigerian's have (yet again as has been the case for a long time) allowed themselves to be divided into sections, forgetting that this is not about winning some trivially petty online 'argument' or being “right”, but about the future of our country.

As Nigerians, we must continue to pay attention and ask more questions rather than clap for every “vague” statement, this will help us unravel the makeup of an average Nigerian politician. In Nigeria, if you are a good or sweet “talker” you have two career paths – on the pulpit or a Motivational speaker.

As the Presidential debate approaches in 2019, our aspirants must tell Nigerians what they have in stock for us in the more sedated atmosphere and not the cacophonous and boisterous crowded campaign venues.

All the Presidential aspirants should be brought face-to-face to explain to Nigerians how they have or do intend to tackle the practical issues of insurgency, steep downturn in our economic fortunes, educational sector crisis amongst other issues that are germane in nature which can be addressed.

Alao Abiodun is a Journalist, He can be reached via [email protected] .

12 thoughts on “Of Nigeria's Vice-Presidential Debate: The Pregnant facts and the sweet talks”