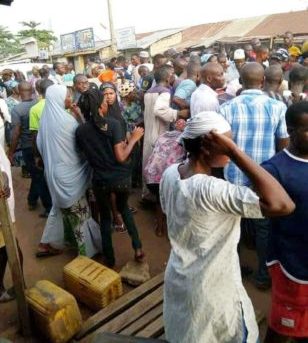 THE high-powered police investigation team deployed in synergy with the State Criminal Intelligence and Investigation Department to unravel the Offa bank robbery in Kwara State have arrested the nine armed robbers directly involved in the act and attack on a police station.

The Police teams engaged in massive raids of identified criminal spots and flashpoints, stop and search operations, visibility and confidence building patrols, intelligence gathering which led to the arrest of the suspects. Some of the arrest also involved serious exchange of gun fire between the Police and the suspects in their various hideouts.

The suspects arrested have admitted to the various criminal roles they played in the banks robbery attacks and are also assisting Police investigation into the incident.

One of the suspects, Adegoke Shogo, 29, native of Offa Kwara State, was arrested in Offa after the bank robbery and the attack on the Police Station. He is drug baron and also an Indian Hemp dealer in Offa Kwara State. According to intelligence gathered from cultivated and reliable informant, he is alleged to be one of the sponsors of the robbery attack and the Police Station in Offa. He has made useful statements to the roles he played in the armed robbery.

Also, Kayode Opadokun, 35, native of Offa Kwara State, was found out to have been released from Prison three months ago after serving only eight months of his sentence years for armed robbery, notorious armed robber and confirmed gang member of the Offa bank robbers. A Barrette pistol and six rounds of live ammunition was recovered from him. He has admitted to the criminal roles he played in the Offa Banks robbery.

Another member of the gang, Kazeem Abdulrasheed, 36, is from Offa, Kwara State, from whom a victima��s phone was found. He was arrested in Offa

The others are Azeez Abdullahi, 27, native of Offa Kwara State, Gang member from whom a Victima��s Phone and SIM Cards were recovered; Alexander Reuben, 39, native of Isoko LGA Delta state. He is a notorious, deadly and hardened bank robber from whom GMPGs, rocket launchers and severalrRifles were recovered in 2015. He was released from prison in December 2017, and arrested on April 11, in Lagos.

Also, Jimoh Isa, 28, native of Okene Kogi State indicted by technical intelligence generated on the bank robbers, was arrested on the April 11, in Lagos.

Three suspects namely Azeez Salawudeen, 20, Adewale Popoola, 22, and Adetoyese Muftau, 23, from whom two phones and SIM cards belonging to victims were recovered have also made confessional statements admitting to the various roles they played in the commission of the crime.

Other suspects in the net are Aminu Ibrahim, 18, arrested in Ilorin,

These three suspects in whose possession another Beretta pistol and 14 rounds of live ammunitions were recovered were arrested in connection with the Offa bank robbery. They have previously been investigated and charged to court for armed robbery and cultism. They have made confessional statements admitting to the various criminal roles they played in the recent bank robbery in Offa.

a�?All the suspects during investigation confessed to the various criminal roles they played in the commission of the crime, however, investigation is being intensified to arrest other suspects still at large and bring them to justice,a�? according to a statement by Jimoh Moshood, Force Public Relations officer.

a�?The Nigeria Police Force once again deeply com,miserates with the Government and People of Kwara State, most especially the people of Offa and the families of the victims. The Force will leave no stone unturned in unravelling this dastard act and bring all those responsible to justice. The Force appreciates the supports from members of the public so far and calls for calm and their cooperation to sustain the normalcy that has been restored in the State,a�? it said.

Police In Adamawa Arrest Seven Christians Who Protested Against Herdsmen