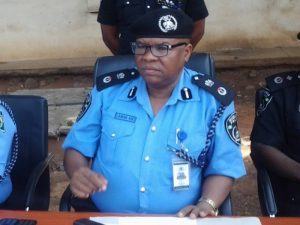 The Commissioner of Police in Kwara, Mr Lawan Ado on Saturday said seven suspects have been arrested in connection with Thursday’s robbery attacks in Offa.

A number of injured victims are receiving treatment in different hospitals in Offa and Ilorin.

Ado told newsmen on Saturday in Ilorin that, a�?seven suspects were arrested; one at Igosun road and six others at different locations in Offa.

a�?They are helping us in our investigation and seven vehicles abandoned and recovered from the armed robbers, while some rifles were carted away by the robbers.

a�?The Inspector General of Police has ordered a full investigation and has directed his Intelligence Response Team and others to assist in getting the robbers arrested.

a�?The Command wishes to express its heartfelt condolences to the families and friends of the victims while also wishing the injured quick recoverya�?, he said. (NAN)