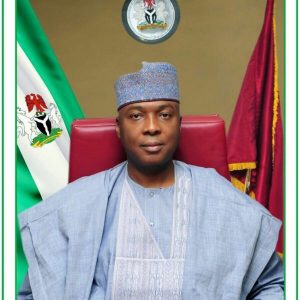 The Inspector General of Police, Ibrahim Idris on Monday reignited the investigation of the Senate President Bukola Saraki on the robbery in Offa on 5 April in which 31 people were killed.

Idris in a a letter sent to Saraki , Idris asked him to make himself available to the head of the Investigation Team at the Intelligence Response Team at Guzape Junction, Asokoro Extension, Abuja at 8a.m.

But the Senate President says that the latest invitation was part of the political gambit by the ruling All Progressives Congress and the presidency to force him from the imminent decision to dump the party.

The police had on 4 June asked for Saraki's reaction to the statement made by some of the suspects arrested in connection to the most deadly robbery in the history of Nigeria. Saraki wrote a statement dated 7 June.

“It is in line with the above that you are requested to report to the head of the Investigation Team at the Intelligence Response Team at Guzape Junction, Asokoro Extension, Abuja on 24th of July, 2018 at 8am for further investigation on the matter.”

In a response last night, Saraki described the invitation as a mere afterthought which is designed to achieve political purpose.

The President of the Senate, Dr. Abubakar Bukola Saraki has stated that the invitation to him by the Police to report to a station in Guzape over the Offa robbery investigation is a mere afterthought which is designed to achieve political purpose.

Saraki in a statement by his Special Adviser on Media and Publicity, Yusuph Olaniyonu, stated that he has it on good authority that the Police had already decided on the suspects to arraign in court in Ilorin, Kwara State on Wednesday based on the advice of the Director of Public Prosecution (DPP), Mohammed U.E. and that the turn around to invite him was a ploy aimed at scoring cheap political points.

Full text of the statement:
“I have been reliably informed that the police invitation was planned by IG as a ploy to stop an alleged plan by some Senators and House of Representatives members from defecting from the All Progressives Congress (APC).

“It was also said that if I was detained between Tuesday and Wednesday, that will abort the so-called defection plan.

“While I continue to maintain that the issue of my position on the 2019 elections is not a personal decision for me alone to make, it should be noted that all these concoctions and evil plot cannot deter me. Those behind this fresh assault will fail as I have nothing to do with the robbery incident or any criminal matter for that matter.

“I am aware that following a request made by the Police on June 13, 2018 to the Director of Public Prosecution (DPP) of the Federation had written a legal advice dated June 22, 2018, in which he stated on page 5, paragraph (f) that “For the Senate President and the Kwara State Governor, this office is unable to establish from the evidence in the interim report a nexus between the alleged office and the suspects”.

“The Police have obviously corrupted and politicized their investigations into the Offa robbery incident. They have turned it into an instrument for the party in power to suppress perceived opponents, witch-hunt issue for blackmailing people from freely choosing which platform on which they want to pursue their ambition and a matter for harassing the people whose exit from APC would harm the chances of the party in the forthcoming elections.

” I want to make it apparent that I have no hand in either the robbery incident or any criminal acitivity. The Police in their haste to embarrass me sent the invitation to me at 8pm and requested that I report to the station by 8am tomorrow morning. This obviously demonstrated their desperation as I do not see why they are now in a hurry.

“They also stated in today's letter that because in my response of June 7, 2018 to their own letter written on June 4, 2018, I stated that I was responding simply to the contents of the letter and that the full text of the statement made by the arrested suspects which they claimed indicted me was not made available to me, they were now including the suspects statements in the current letter. Yet, instead of including the suspects' statements, they only attached two copies of my own letter to the invitation. No suspects statement was made available.

“This plot aimed at compelling me and my associates to stay in a party where members are criminalised without just cause, where injustice is perpetrated at the highest level and where there is no respect for constitutionalism is an exercise in futility and it will fail.

“Once again, my confidence in God and our judicial system remains intact and unshaken. The truth shall also prevail in this case”, he stated.

3. During the investigation of the Armed Robbery by the Intelligence Response Team, a CCTVfootage of the Armed Robbery in one of the banks, captured the image of two persons. The CCTV footage was circulated on the social media and this led to their identification asKunle Ogunleye and Micheal Adikwu. The two persons were tracked and arrested by the Police and they made very useful statements and named the five gang leaders who organized the Armed Robbery.

4. Some of the five gang leaders made confessional statements admitting their participation in this worst Armed Robbery in the history of Nigeria and that they are political thugs under the name, Youth Liberation Movement aka 'Good boys' allegedly sponsored by you and that you have given them firearms, money and vehicles. It was equally discovered that one of the vehicles, a Lexus Jeep,used by the gang leader (Ayoade Akinnibosun) has a sticker plate number “ 'SARAKI' Kwara State of Harmony ”.

5. The Lexus Jeep was parked in the Government House after the arrest of Ayoade Akinnibosun and in order to conceal evidence, the Chief of Staff to the Executive Governor of Kwara State, arranged for the removal of the sticker plate number “SARAKI Kwara State of Harmony ” from the Lexus jeep and quickly registered it in the name of the suspect, six days after the suspecthas been arrested by the Police.

6. Specifically Mr Ayoade Akinnibosun 'm' 27 Years in his Confessional Statement stated that “members of his group are Political Thugs working for Senator Bukola Saraki and Governor of Kwara State”. That he is the head of the Political Thugs named Youths Liberation Movement coveringabout seven (7) Local Governments Areas of Kwara South. That he gets vehicle and monetary gifts etc from Senator Bukola Saraki through the Chief of Staff to the Governor of Kwara State; that the last money he got directly from Senator Bukola Saraki was Five Hundred Thousand (N500,000) Naira. He made mention of some other thugs in Kwara Central with guns which Senator Bukola Saraki is sponsoring as Alhaji Alawo, Alhaji Dona, Alhaji Jawando among others, that Senator Bukola Saraki supplies the arms and vehicles to the thugs; that everyone in Kwara Central fear them because of their guns and ability to kill anybody without hesitation”. Furthermore the suspect Ayoade Akinnibosun stated that the date you Senator Saraki visited Offa in sympathy with the victims to the Palace of the Oba, that he and two other gang members were with you in the convoy.

7. In your response to the above allegations, you stated “ by virtue of my participation in politics, I have a large followership which makes it impossible for me to know all of them. I can say categorically that I am in no way associated with the vehicle mentioned in your letter nor have I given any arms to any thug or other persons in Kwara State or anywhere else. For the records, your letter under reference did not include the full text of the statements made by the accused persons”

9. It is in line with the above that you are requested to report to the head of the Investigation Team at the Intelligence Response Team at Guzape Junction, Asokoro Extension, Abuja on 24th of July, 2018 at 8am for further investigation on the matter.

10. Please as always, accept my warm regards and high esteem.