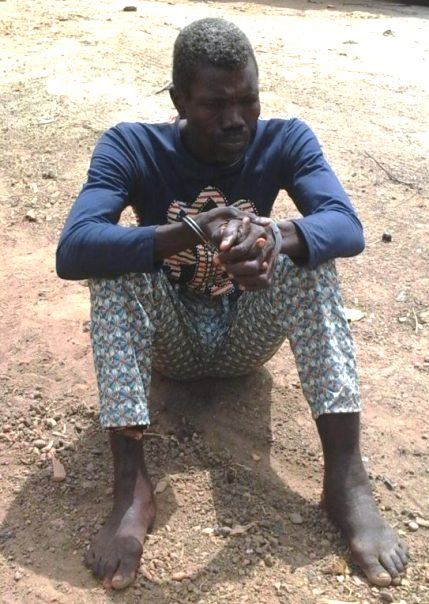 The suspect said this while speaking to the media at the headquarters of Ogun State Police Command, Eleweran, Abeokuta, the Ogun State capital.

Adebisi who appeared incoherent during the interview said he had no food for two weeks and that nobody was ready to feed him.

Adebisi, who was reported to be mentally deranged, said he was ready to face the consequence of his action.

Asked why he killed the two pupils, he said, a�?I did not eat for two weeks and I went out to beg for money. Nobody gave me money. When I had money, I took care of family members, friends and even outsiders.a�?

a�?It was a bad life, then I went and took cutlass and I was prepared to face the consequence.a�?

Adebisi who said he was not yet married, said he used to organise lessons for children, and he got paid N20 for each child.

Parading the suspect Thursday, the state Commissioner of Police, Ahmed Iliyasu, who condemned the heinous crime, said Adebisi would soon be charged to court.

The victims, Mubarak Kalesowo, and Sunday Obituyi, were killed by the suspect on Monday 12th March, 2018.

The suspect was said to have stormed the school while the pupils were on lunch break and did the havoc before fleeing the scene.

He was however arrested, Wednesday, following a manhunt by combined team of youths in the area and hunters association.

Re-Ordered Election Day Killing: Buratai & His Squad Of Kaki Goons Risk Kissing The Iron Bars Of The Prison For 1000 Years (Each) Without Parole