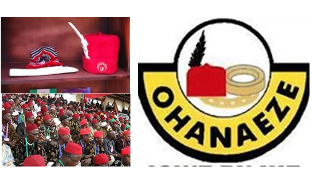 The Igbo Welfare Association (IWA) popularly known as the Ohanaze Ndi Igbo, Borno state Chapter has appealed to Governor Kashim Shettima of Borno state to come to their aid by assisting Igbo widows and orphans of their members that were killed during the boko Haram insurgency in the state in the past 9 years.

It also commended the federal government, Governor Kashim Shettima, security agencies , vigilante Civilian JTF and Hunters for their magnanimity, efforts and sacrifices in the restoration of peace and alleviation of sufferings of people affected by the insurgency as well as the good people of Borno state for their hospitality and peaceful coexistence despite the security challenges.

Chief Nwaogu also appealed to the new Exco members to cooperate with the government and traditional institutions during their tenure and lead the association to the promised land.

The new President General Chief Azubuko called on all the Igbos to eschew their differences, resolve their conflicts and misunderstanding in order to develop and promote their noble course of the association.

He thanked the Shehu of Borno, HRH, Alhaji Abubakar Garbai Ibn Umar El Kanemi for his fatherly advise and counselling and Governor Kashim Shettima for his steadfastness, firmness, courage, sympathy and humility in steering the affairs of the state during the insurgency.

Chief Azubuko also appreciated the federal government, donor agencies, humanitarian and development partners for their support and assistance to the people and government of Borno state while recognizing the intelligence and doggedness of the security agents in combating the insurgency in the north east.

He pledged to implement developmental activities and strategies to alleviate the welfare and status of the association while appreciating the generous donations made for the launching of a Brochure for the association projects where over N530,000 was realized.

Chairman of the occasion, Chief Napoleon Egbuonu called on all the Igobs to be united and live in peace, unity and harmony with all and sundry while appreciating Governor Kashim Shettima for appointing an Igboman as Special Adviser to the Governor on Political Matters.

He also implored the new Exco to be upright and just in the discharge of their responsibilities and thanked the Nigerian armed forces and other security agencies for their efforts, sacrifices and bravery.

The chairman further appealed to the members of the association to come out enmasse and vote in the forthcoming 2019 general election urging them to register with political parties of their choice and vote credible leaders that will serve them transparently and democratically.