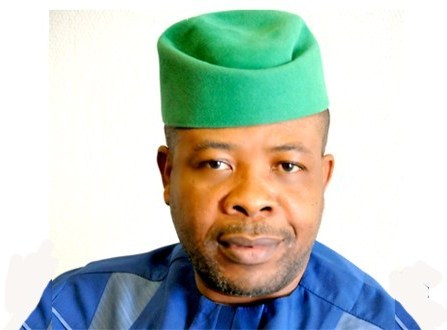 In his goodwill messages to his friends and well wishers in his home town Umuneke, Ugiri, Isiala Mbano during his celebration of Hon. Ihedioha’s victory, the CEO of Geotech Technologies Limited turned politician said the win of PDP in Imo State and the defeat of Rochas Okorocha and his son in-law were victories for all Imolites and that the state is truly liberated. He said Imo State is a PDP state and that the people of the state will not regret their choice of bringing PDP back to power.

He reiterated that the people of Imo should dry their tears and cry no more as lack of qualitative governance they witnessed under Okorocha and APC will be history under Ihedioha and PDP.

“PDP and Ihedioha have come to clean the tears of Imo people from a woefully failed government of Okorocha who subjected them to excruciating agonies through bad and poorly executed government policies. I thank them for returning PDP to governance in Imo State, because Imo is PDP and PDP is Imo".

“There will be no more substandard road constructions or what Imo indigenes under Rochas called ‘China roads’ in Imo State again,” said Engr. Anusie.

Engr. Anusie who contested for the House of Reps. Isiala Mbano/Onuimo/ Okigwe Federal Constituency and currently the Chairman of PDP Ugiri campaign council, and the Vice-Chairman representing Ugiri at the Isiala Mbano PDP Campaign council said that the government of Okorocha made Imolites poorer than he met them. He echoed that Imo is heavily indebted, and that Okorocha with impunity destroyed houses, markets and people’s properties without due process and any form of compensation.

“Okorocha borrowed billions in the name of Imo but there is nothing tangible one can pinpoint in Imo to justify such huge amount.

“How about the ‘bailout fund’? Why are Imo workers still owed salaries? Why are our pensioners not paid? Why is Imo Transport Cooperation (ITC) in the State it is today? Well, Imo indigenes will soon find out, just very soon,” said Engr. Anusie.

However, while he said that it was true that the political dynasty Okorocha wanted to build in Imo has been crushed and defeated, he urged PDP members, supporters of PDP and Imolites to be magnanimous in victory.

“It does not matter the party one belongs, we are all Imolites. The time for politics is now over and we must all come together and support Ihedioha to succeed, for the success of Ihedioha and PDP is the success and progress of Imo and Imolites.

“I plead with members of our party as good democrats and all our supporters not to be abusive or arrogant or try to provoke anybody because of PDP’s victory for we are all winners. I know that we were all provoked by Okorocha’s insults and attempts to create a political dynasty in Imo State that has failed, but we should not forget that magnanimity is an act of intelligence and maturity,” appealed Engr. Sunny Anusie.

Engr. Anusie who called Hon. Obinna Onwubuariri who contested the House of Reps. primary ticket in PDP together as his brother wished him well and urged all elected PDP members both at the states and at the federal levels to prove their mettle by fulfilling there electoral promises to the people so that it will be much easier for PDP’s victory in 2023.

He congratulated them all, thanked God and said, “Imo State is indeed liberated.”

Yes, with the killing of bad governance and political dynasty by PDP in Imo, and their upcoming burial arrangements on 29.05.2019, Ihedioha as the person the cap fits has been chosen to be the Chief Priest that will perform the funeral rites, and when that is done, Imo State will indeed be freely free from “Iberiberism chapter one vs one”. But until then, we are still at the grips, chains and shackles of “Iberiberism”, and our joy will be complete and holy when this Egypt and this Pharaoh we are seeing today we see no more.