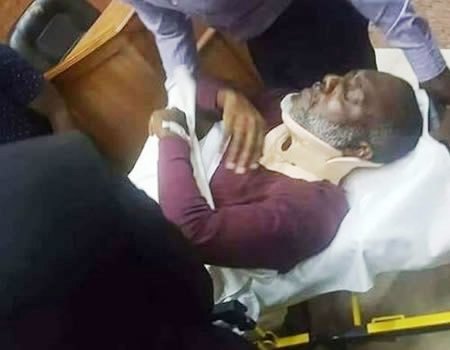 It was sometime in December 2017. One of those days I decided to visit the courts to watch proceedings as a way of keeping myself inspired while I waited for an appointment in the vicinity. I walked through the doors and since I could leave at any moment for my appointment, I decided to choose the closest court near the exit door. That happened to be a�?Court Onea�? of the Federal High Court, Abuja.

As I entered, proceedings were already on. I saw Murtala Nyako, former governor of Adamawa State seated in the dock, looking rather unperturbed. His disposition in the dock was not surprising as the judge he was seated before gave him no reason whatsoever to be ruffled.

The judge, a freshly looking handsome man of unblemished complexion, fair as the glowing colours of the early morning sun on a bright harmattan day, was so soft spoken and gentle in his mannerisms that I fixed my gaze at him wondering what a just judge he would be.

Soon after, Nyakoa��s case was adjourned. Then that of Alex Barde, former Chief of Defence Staff, was called. The judge continued his friendly demeanour to the case with Barde granted all courtesies by the court. By this time, I did not know who the judge was. I knew at first sight that he looked like the Justice Okon Abang seen on TV and in the newspapers, but his saintly looks and angelic demeanours to the two men who earlier stood trial alongside others before him made me doubt if this was Okon Abang. I was further convinced that this could not be Abang when I remembered that the unpopular Abang had been transferred to Asaba.

But as I was admiring the judge, the next case was called shortly after Olisa Metuh walked in about 12 noon. Then the whole atmosphere of the court changed and the exotic ambience of justice and fairness that once hovered around it quickly gave way to hostility and bitterness.

What surprised me most was how a judge could go from virtue to vice in split seconds and his mood dictated not by the cause of justice but by the obvious resentment for the person standing trial before him.

Because of his injudicious approach to this particular case as compared to the first two (Nyako and Barde) before him, I was forced to ask the journalists around me who the judge was. I had always known that Okon Abang was the one handling Metuha��s case, but with the news that he had been transferred out of Abuja where the case was holding, I did not expect him to still sit on matters in Abuja until my findings that his transfer does not affect the cases he was handling before the transfer took place but only that he would not be assigned fresh cases in Abuja convinced me

It was then it dawned on me that the man sitting in the hallowed seat of justice was the controversial Okon Abang.

What I noticed first was that unlike the way he addressed the lawyers defending Nyako and Barde, Abang became inexplicably hostile to Metuha��s lawyers. He was sharply cutting them short from making their points and even led the prosecution with questions, an action which Metuha��s lawyers raised objections to several times but were cut short.

This was the case especially as it concerned the vexed issue of whether former president Jonathan should be compelled to appear in court as a witness as requested by Metuh and its implications for the case.

The aggression and hostility exhibited by Abang on this particular day was enough to tell anyone that expecting justice for Metuh in Abanga��s court is just like waiting for the ocean to be emptied with a teaspoon.

One is not surprised then that all the applications Metuh had made to go treat himself properly and be fit enough to face the rigours of trial which Abang in his wisdom makes unnecessary too long so as to subject the former PDP National Publicity Secretary to excruciating pains since he has the knowledge that with his spinal cord injury, Metuh lacks the stamina to either sit or stand for too long, fell on deaf ears.

It is pertinent to state at this point that the Nyako and Barde cases before Metuha��s did not last up to an hour each on this particular day, but Metuha��s was made to last an upward of four hours just to further pile stress on his weak spines.

Even medical reports from experts were not enough to convince Abang to allow Metuh some time to seek medical attention to his deteriorating health. Abang doubted every report from the doctors of even government-run hospitals. But he was quick to grant Murtala Nyako leave for the same purpose while a co-accused with him, Zulkifikk Abba, was granted leave for a reason as a�?softa�� as a�?to see his family abroada�?.

With all these, it is evident that Okon Abang has a personal or political axe to grind with Metuh. So when the world was greeted with the inhuman treatment of forcing Metuh to appear in court in pains and on a stretcher with neck braces to support his frail frame, only a few people were surprised.

Abang is a judge whose ruling in the past with particular reference to the Ondo PDP crisis shortly before the Statea��s last gubernatorial election was described by Appeal court Justices as a a�?frauda�?. a�?We set aside the highly misplaced; most fraudulent judgement on June 29,a�? they said. Such a strong word to use on a serving judge! But who should know better if not his senior colleagues in the judiciary.

The law is meant to be firm and fair. The pursuit of justice without fairness is itself injustice. When prosecution is constantly turned into persecution, we endanger the very root of democracy. And when citizens lose confidence in the system, particularly the judiciary, we unintentionally enthrone lawlessness. The lawlessness of a society is an indication of an absence of fairness in the firmness of its judicial system. We must avoid this no matter who the victim is. It is Metuh today, it could be anyone else tomorrow!

Olisa Metuh might have appeared in court in braces, bandages and on a stretcher to the ecstasy of his traducers as it is obvious he needs to be treated, and there is no crime in that, but his presence in court in that condition on that day is symbolic of the sorry state of our judiciary with characters like Okon Abang still hanging around it. It is a pointer to the fact that those who need urgent surgical operation are those judges who cannot divorce their personal, political and other parochial interests from their roles as arbiters of justice. Their consciences need real cleansing.

Elections as a joke, as all change remains the same

Development In Nigeria: The Creative Involvement Of The Youth

8 thoughts on “Olisa Metuh: When Justice is in Urgent Need of Surgery”