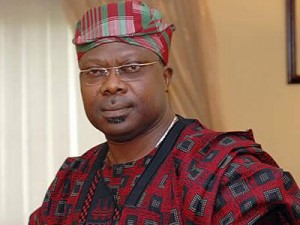 A Chieftain of the Peoples Democratic Party (PDP), Chief Ebenezer Babatope, on Saturday said he was personally pained by the exit of Chief Iyiola Omisore from the party.

Babatope, a former Minister of Transport, made the statement in a telephone interview with the News Agency of Nigeria (NAN).

NAN reports that Omisore, a one-time governorship candidate of the PDP dumped the party for the Social Democratic Party (SDP) on May 20.

In a statement announcing his defection to SDP, Omisore said he was moving to a credible platform to realise his governorship ambition to “rescue the state from the All Progressives Congress (APC).”

The Osun State Chairman of SDP, Mr Ademola Ishola, had on Thursday confirmed Omisore’s membership of the party at a news conference in Osogbo.

But Babatope, who is also from the state, said Omisore’s defection was a sad thing not only to him but to PDP.

He said the former deputy governor of the state did a lot to grow the PDP both in Osun and at the national level.

The former minister said he did not expect Omisore to leave the party as he was a committed member and nice to party faithful.

Babatope said he should rather have resolved his differences with the party and realise whatever ambition on the PDP platform.

“Honestly, I do not know what to say on Omisore’s defection except to say I am sad and the party is sad because he was a great and committed party man.

“I did not expect him to leave no matter what would have been his misgivings.

“I will be very happy any day if he decides to return because the Omisore that I know is PDP at heart.

“We will do our best to talk to him to return because in all respect and fairness, he was an asset to PDP,” he said.

Babatope, however, said that he would remain in the PDP, describing it as ultimate party with the right agenda for Nigeria.