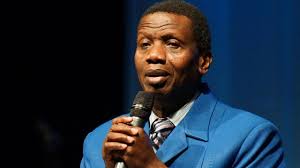 Nigerian Lawmakers and politicians have started mouth washing the General Overseer of the Redeemed Christian Church of God (RCCG), Pastor E. A Adeboye popular known as Daddy G.O. This is coming after the renowned man of God called on the 36 states elected governors and their house of assembly counterparts across the country to cut their salaries and emoluments by 50% in order to tackle the challenges the state governments are facing in education, health and other critical sectors.

Daddy G.O. as fondly called by his congregations for many years in the past has been an onlooker totally disengaged himself from commenting on the economic and political woes bedeviling the progress of the country caused by poor leadership skills of our so called selfish politicians and political leaders. Some eminent Nigerians and revered congregations in his church after protests and open letters, coupled with the fact that the current Vice President of the Country, Prof. Yemi Osinbajo is a member and a Pastor of his Church geared the man of God up and started sculpting out his own opinions and perspectives on problems rocking the lives of the Nigerian citizens.

Some elected governors and house of assembly members in their bid to lash back at Pastor Adeboye, advised him to lead the way by sacrificing a percentage of their tithes and offerings from the wealth his church amass from his members who could not afford to send their children to the school built by his church.

The above comment is really dishonorable from our so called honourables. The Redeemed Christian Church of God under the pastoral leadership of Pastor E.A Adeboye has done a lot in terms of CSR. In fact there is an independent department mainly founded to cater for the needs of the poor in the church. Last year the Church donated two dialysis Machines to the University College Hospital and also donated some millions to the University of Ibadan. The Church has done what many of the governors and their House of assembly members could not do and even will not do till the expiration of their tenures.

Pastor E.A Adeboye should not let their comments dissuade him; he should continue saying the truth as he is known for in his sermons. Nigerians are watching, the truth has been told, and 2023 is around the corner.

Ekweremadu's Assault and the Dynamics of Revolution

Kemi Adeosun: When Forgery is Elevated to a Cardinal Virtue

5 thoughts on “On the Defense of Pastor E.A. Adeboye”