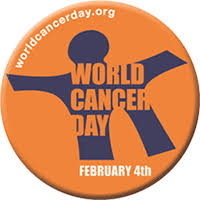 Sunday 4 February 2018 a�� World Cancer Day: On Sunday 4 February, World Cancer Dayraises awareness of the millions of people world-widefacing unequal access to cancer detection, treatment, and care services. With cancer leaders, health professionals and supporters across the world pushing for urgent action to reduce the rate of premature cancer deaths globally, the day calls for diagnostic and treatment access to be prioritised.

The global target ofa 25% reduction in premature deaths from cancer and non-communicable diseases* (NCDs)by 2025is possible. However, to deliver on thisglobal commitmenta��, the current inequities in risk factor exposure, and in access to screening, early detection and timely and appropriate treatment and care,must be addressed.

a�?Set in 2011, the World Health Organizationa��s target to cut premature NCD deaths by 25% within 14 yearsis coming towards its half way mark. We can meet the target, but more action than ever will be required. Inequality in access to prevention, diagnosis,treatment and care makes reducing premature deaths from cancer difficult. If we are committed to achieving this goal, we must act quickly and decisively to make access to cancer services more equal all around the world.a�?

World Cancer Day,led by the Union for International Cancer Control (UICC),every yearrallies the worlda��s voices against what the World Health Organization (WHO)recently recognised for the first time as theleading cause of global morbidity [1] .

Today, there are an estimated 8.8 million deaths from cancer every year [2] . However, it is the low- to middle-income countrieswho are bearing the brunt, as approximately 70% of deaths occur in developing countries, which are the most ill-equipped to copewith the cancer burden [3] .The starkest area of inequity relates to childhood cancers a�� a specific group that the WHO underscored in its landmark 2017 Cancer Resolution – with survival rates over 80% in high income countries and as low as 20% in low income countries [4] .

Professor Sanchia Aranda:
a�?In the last year of the a�?We can. I can.a�� campaign for World Cancer Day, we hope to inspire real action from governments and civil society in addressing the inequities in cancer diagnosis, treatment and care, which unfortunately largely affects the most vulnerable populations in every country.In Australia, while we maintain some of the best cancer outcomes in the world, national data shows that the gap between those in the highest and lowest socioeconomic groups is continuing to widen over time.These overlooked voices must be more forcefully represented in our discussions this World Cancer Day.a�?

An acute example of a global accessgap particularly affecting the underserved and underprivileged is access to radiotherapy. As one of the major methods of treatment for cancera�?, radiotherapy is recommended for52% of cancer patients [5] .Glaringly, the gap between need and availability is highest in low- to middle-income countries; 90% of low- to middle-income countrycancer patients lack access to radiotherapy [6] .Yet, issues of access to this critical treatmentalso cuts across many countries. In mainland China, there exists a gross shortage of radiotherapy facilities, with access varying widely from province to province. Depending on where you live in EnglandA�,patients canface significant variation a�� anywhere from 20% to 70% – in accessingIntensity Modulated Radiotherapy, an advanced form of radiotherapy treatment [7] .

As an urgent response to the global equity gapand the critical need for an in-country response, UICC today officially launched,Treatment for All. It marks the second new initiative by UICC in as many years to mobilise national action to improve access to diagnosis and treatment for cancer, and is a direct acknowledgementthat the cancer burden cannot be alleviated exclusively throughprevention to reduce cancer incidence. Dr Cary Adams, Chief Executive Officer of UICC:

a�?The tsunami of cancer cases anticipated in the coming decades requires a persuasive and robust response at all levels a�� global and national. Treatment for All, in tandem with its sister initiative, C/Can 2025: City Cancer Challenge,will work to accelerate progress by translating global commitments to evidence-, safety- and quality-basednational actions.a�?

By empoweringindividuals, cities, countries and governments to leverTreatment for Alla��s four pillars of cancer treatment and care, we can achieve:

Today, on World Cancer Day, a�?We can. I can.a�� improve access and deliver on the global target of a 25% reduction in cancer and NCD premature deaths by 2025.

Re: Sergeant David Bako Deserts Nigerian Army, Leaks How Dapchi Girls Abduction Was Planned In The Villa And Executed With N80 MillionA�