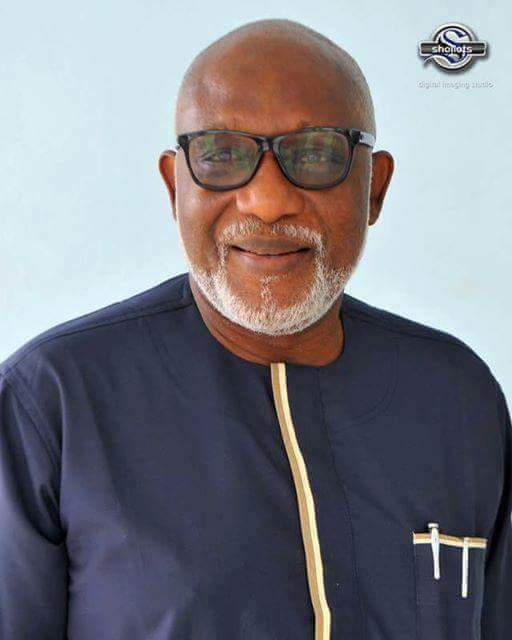 Recently I read the encounter of two military leaders and it got me thinking if this often is not the case with leaders and in this case more precisely about the Santa at the Alagbaka Government house in Akure.

” I listened to a wise military leader share his experience with an eager, newly decorated General, a�?Recently, have you started to notice that when you tell jokes, everyone erupts into laughter a�� and that when you say something a�?wisea�� everyone nods their heads in solemn agreement?a�? The new General replied, a�?Why, yes, I have.a�? The older General laughed, a�?Let me help you. You arena��t that funny and you arena��t that smart! Ita��s only that star on your shoulder. Dona��t ever let it go to your head.a�?

The star on the shoulder of the new ‘general’ in the affairs of Ondo state, Arakunrin Rotimi Akeredolu seems to be getting into his head and leaving him deluded or how else would one describe the comedy he calls leadership and governance?

I have refrained for this long to criticize his administration but obviously, a year is enough to know this one will likely not end well judging by proverb of the Yoruba people that if it takes a year to rehearse madness, when exactly will the mad man hit the market square?

From commissioning a bill board to photographs of eating as a pupil to mark one year in office, to the unbecoming act of evasiveness and recently the undue astronomic hike in the fees of students of the state owned institution, one may begin to ask if Santa thinks he alone has some sense and the rest of us are simply morons or borrowed a space as citizens.

Although we live in a world that glorifies self-belief and stigmatizes self-doubt, there are really only two advantages to thinking that youa��re better than you actually are. The first is when youa��re attempting to do a difficult task like he is doing as a chief executive Believing that you can do something difficult is half the battle, but if you truly overrate your abilities, then by definition you will fail.

The second is fooling others into thinking that you are competent. Most people will be found out eventually, and the personal benefits of faking competence will be offset by the negative consequences for others.

Deluded leaders come across as charismatic and talented as Akeredolu seems ( or how else did he become a SAN), but their overconfidence puts their followers at risk in the long run. In contrast, when leaders are aware of their limitations, they are less likely to make mistakes that put their teams, organizations, and countries in danger.

May someone tell SANTA that Ondo state is not his chamber where he decides what salary his employees earn without an appeal. How on earth does the new pro chancellor of Adekunle Ajasin University rose to say in a meeting with the Union last week that the least the governor wants to hear of tuition fee in AAUA is two hundred thousand naira. What audacity if not delusion for him to so decide and care not what becomes of those that could not even afford the tuition when it was less than thirty thousand?

Isn’t governance supposed to lessen the burden of those that are burdened and bridge the gap between the haves and the have nots?

Where is the place of negotiation? Where is empathy in the so called helms man?

With narcissism rates rising steadily for decades, there is no reason to expect our Santa to be more accurate in his self-evaluations, let alone to be humble. Strengths-based coaching, and removing negative feedback from performance appraisals are aggravating the problem, validating leadersa�� fantasized talents much like when parents tell their children that they are the brightest and cutest in the world.

This is especially likely when leaders are intimidating as he has been, or when they surround themselves with sycophantic aides as it has always been the lots of his kind. As a result, leaders are deprived of the very feedback they need to get better.

Let someone please tell our dear Santa Governor that his bag of gifts bears pains and agony and he can only drive the people to their limit before they show him what makes Ondo people different from other tribes and people.

Those that were before him and did even better can better tell the story of why not to fail the people.

Ayo Ologun is a broadcast journalist and writes from Ondo.

2019 Election And The Risk Nigerians Must Take