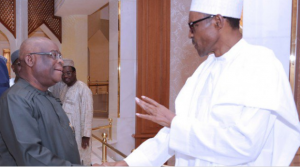 The firm resolve of the suspended Chief Justice of Nigeria (CJN), Justice Walter Onnoghen, to see his judicial ordeal through has led to the  collapse  of the political solution worked out by certain interests in the administration of President Muhammadu Buhari and the judiciary, to save him the embarrassment of being arraigned tomorrow at the Code of Conduct Tribunal (CCT), Sunday Tribune has reliably learnt.

The political deal offered him by Presidency elements required him to resign voluntarily to have the criminal charge of alleged non-declaration of assets preferred against him completely withdrawn.

If he didn’t feel like walking away by himself, there was also a  proposal  to have him prematurely retired with full benefits, including the retention of his  membership  of the  Council  of State.

The deal proposed by some elements in the Federal Government was packaged by a security agency and offered to him last week.

Again, on Friday, the same deal was offered him after the Presidency made it clear to certain go-between persons that he had violated the agreement entered into with him, on the need to cleanse the judiciary, before he was appointed in substantive capacity.

He flatly rejected the deal on all the occasions it was presented to him.

According to a very close source to him, “Oga (Onnoghen) is not going to resign. Take that from me. He has resolved to clear his name by seeing this trial through to the end. Yes, they asked him to resign, but if they are very sure he had committed any offence, why asking him to resign when they were the one that took him to court in the first place? With all they have done, and all the lies told the world against him, they expect him not to defend himself and just resign and walk away? No, he is not resigning.”

When asked why he isn’t defending himself in the face of the damaging allegations against him, the source said the suspended CJN had decided against getting into public domain with his accusers, but waiting for the court proceedings to begin fully, for him to say all that is to be said in his defence.

The offer from the prosecuting government is reportedly polarizing the CJN’s legal team, as some senior lawyers on the defence team are reportedly considering the terms of the deal and without being direct, are subtly encouraging Onnoghen to consider certain parts of it.

As of Friday, the government peace offer still dominated discourse within the defence team. For senior lawyers asking Onnoghen to have a second look, the wider implications of outright rejection are said to be their main consideration.

Their most-profound fear is said to be the high possibility of the tribunal, under Danladi Umar, to give a  bench warrant  when the trial resumes tomorrow, ordering the arrest of the CJN for appearance before it (the tribunal).

Umar is also believed to have made up his mind to convict the suspended jurist, a development that would ultimately rob him of his status as a member of the Council of State.

With the way government agencies have handled his case so far, those egging him to consider the deal fear that he might be completely  humiliated  tomorrow by the police, if a bench warrant is eventually issued by Umar.

“Who will stop the police from arresting him, if they could lock his office up? Imagine how bad it will look if he is arrested and brought to the tribunal. We are talking about the Chief Justice of Nigeria. His case is very painful, but the situation doesn’t look good at all and this is beyond his name and integrity now,” a pro-deal source in his camp told Sunday Tribune at the weekend.

The same source was also knowledgeable of the meeting with top presidency officials where the deal was unveiled.

He told Sunday Tribune that support was gradually ebbing for Onnoghen because many political structures that should support him in the fight to regain his seat and credibility are gradually backing off in order to be “politically-correct.”

With his resolve to see the case against him to a logical  conclusion , Onnoghen, according to  checks  with his camp, will be challenging the jurisdiction of the tribunal to try him when the case resumes tomorrow.

He will not be making an appearance still, making the planned  arraignment  almost impossible.

The propriety of Umar, leading a tribunal to try him, will also come up, as the defence, according to a source, will be asking him to recuse himself, having allegedly shown bias against the CJN.

The alleged corruption case against Umar, for which the Economic and Financial Crimes  Commission  (EFCC) is seeking his prosecution, may  come in handy  in pushing the recusal case.

The controversial order which the tribunal granted in-chamber will also be debated at the Court of Appeal tomorrow.

Onnoghen is challenging the order which Lagos lawyer, Femi Falana, described as suspicious and full of contradictions.

If Umar assumed jurisdiction tomorrow, he may insist of the arraignment of the CJN since the Court of Appeal had ruled last week that trial proceedings could not be halted because of the pendency of appeal. (Nigerian Tribune)

Onnoghen: APC in Senate caucus says it's not part of decision to approach Supreme Court