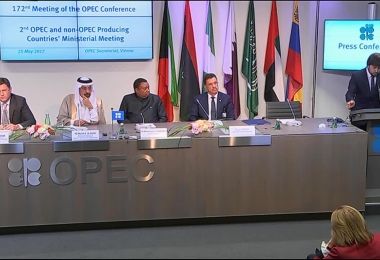 OPEC will sign a co-operation agreement with countries outside the group led by Russia in three months formalising the existing partnership, the UAE energy minister said.

“The declaration of co-operation will be used as a base and will be hopefully finalised in the next three months,” Suhail Al Mazrouei told reporters in Abu Dhabi. “Saudi Arabia has kindly offered to host the summit to sign the [declaration].”

OPEC+, as the alliance undertaking market corrections has been called, agreed at the exporters’ annual meeting in Vienna earlier this month to rollback production by 1.2 million barrels per day at the start of next year. The curbs were viewed as moderate by the markets, which had anticipated a harsher reaction from the producers, particularly following the dramatic plunge in oil prices by 30 per cent in last month from more than US$86 (Dh316) a barrel to $57.50 last month. Oil was trading at $60 on Tuesday at 9.57am UAE time.

Mr Al Mazrouei said the January 1,2019 exit of Qatar, which was announced by the country’s energy minister days before the annual meeting this month, will not having a significant impact either on production or on the morale of the producers club.

“I think the fact that everyone from non-Opec has signed the draft is a sign that they’re keen to continue,” he said. “The exit of Qatar was not understood, it was quite a surprise. We respect their sovereign right. [The exit won’t affect us] because they’ve been in decline and they could not increase their production when we asked them to, so it’s not going to affect our cut in production moving forward.”

The group’s membership is unlikely to suffer further changes, particularly with the addition of newer members such as Equatorial Guinea and Ghana to the fold, as well as possibly South Africa and Canadian province Alberta, which has volunteered a 10 per cent production cut, he said.

“OPEC is growing in net balance in terms of number of countries and we have attracted more member countries, now the total is 24 countries,” Mr Al Mazrouei said.

The UAE’s production, according to Opec’s secondary sourcing method, stood at 3.167 million bpd at the end of October, he added, noting that the volumes for November were higher.

The country would be compliant with a 2.5 per cent trim to overall production from the beginning of next month, he said.

Mr Al Mazrouei dismissed any concerns regarding other producers leaving the group owing to legislation being tabled in the US to challenge Opec’s authority in correcting the oil markets. The No Oil Producing and Exporting Cartels Act (NOPEC) congressional bill asks for state immunity to be removed and for Opec to be sued under US antitrust law for anti-competitive attempts at what is being perceived by some legislators to be the group’s manipulation of supply and prices.

“No one wants higher oil prices that results in the slowdown of the world economy, and that make [oil] consuming countries cry out, no one wants that,” Mr Al Mazrouei said.

“We're not a cartel, we can’t by law force anyone to produce or comply with the 2 per cent cut. There are no measures, or sticks or penalties, it’s a voluntary production adjustment that’s done to contribute to the market balance,” he added.

OPEC+ has faced pressures from the US administration under President Donald Trump, who wants to see prices even lower, tweeting last month that he saw the slip in prices as a “tax cut” for “America and the world”.

9 thoughts on “OPEC to formalize pact with non-member countries”