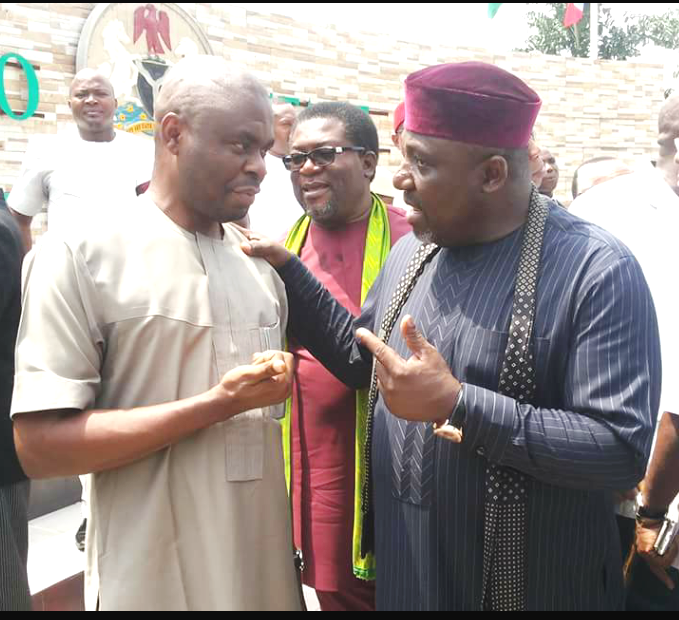 YOUR EXCELLENCY!!!
I’ve chosen this mode of correspondence, ostensibly to draw the attention of Your Excellency and the vigilant global village to these challenges in your government that would be exposed in this letter. And the purposes are to notify Your Excellency, and as well expose the criminals and fraudsters in the government of Imo State. And the facts herein are verifiable, and I shall submit myself for scrutiny in defence thereof.

FIRST!!! It would be recalled that Your Excellency appointed several Deputy Chief of Staff in the general administration and management of the Imo State Government House, Owerri since your reelection in 2015. And one of the persons so appointed in these appointments included ” ENGR ” UJU CHIMA KINGSLEY. And a detailed check on the rolls of members of the COUNCIL FOR THE REGULATION OF ENGINEERING IN NIGERIA ( COREN) exposed a fraudulent existence and bogus claim of the Deputy Chief of Staff ( Operations) , “ENGR ” UJU CHIMA KINGSLEY. And for the records, the said UJU CHIMA KINGSLEY didn’t study Engineering and didn’t acquire any skill in technology, but rather studied COOPERATIVE AND RURAL STUDIES AT THE ENUGU STATE UNIVERSITY OF SCIENCE AND TECHNOLOGY FROM 1996 TO 2000. It became irredeemably irresponsible of the said UJU CHIMA KINGSLEY to hold himself out and / or affix the title of ” ENGR ” in his name in both private and official correspondences. The ACT establishing the COREN makes it an offence punishable with imprisonment or fine and / or both imprisonment and fine for anyone who knowingly or unknowingly holds himself out or affixes Engineer as title when such a person isn’t registered with the Council. There’s an established evidence of this crime on the Deputy Chief of Staff ( Operations) , “Engr” UJU CHIMA KINGSLEY through letters at the ENTRACO, ITC, ISOPADEC, OHAJI/ EGBEMA LOCAL GOVERNMENT AND THE GOVERNMENT HOUSE, OWERRI, including all the promotional billboards erected by him during the Christmas celebrations. So, whether Your Excellency allows the law to take its fullest course in this criminality and dishonesty or not, such activities in investigation and prosecution await ” ENGR ” UJU CHIMA KINGSLEY upon the expiration of the appointment. TAKE NOTICE, THEREFORE.

SECOND! The nature of the Federation of Nigeria makes it a patriotic accomplishment for any Governor of a State in Nigeria to appoint persons who aren’t indigenes into certain grades of the political or public offices. For the records since 1999, Governors TINUBU AND FASHOLA appointed BEN AKABUEZE as a Commissioner in Lagos State. Governors KWANKWASO AND SHEKARAU appointed persons of Igbo extraction as Special Advisers and Commissioner in Kano State. Governors UDENWA AND OHAKIM appointed such persons not from Imo State as Commissioner and Special Advisers and others. Governor WIKE has appointed a Commissioner currently from the Oil Producing Areas of Imo State in Rivers State. Another illustrious indigene of Imo State is enjoying an appointment in Kogi State by GOVERNOR BELLO. AND GLEEFULLY, Your Excellency has made such considerations in your first term and your current second term. And for emphasis, such considerations in political appointments are designed fundamentally to promote NATIONAL INTEGRATION, and thus engender NATIONAL COHESION amongst the tribes and tongues of Nigeria, but not to undermine the rights and privileges of the aborigines . It’s therefore, very unconscionable and wicked to promote and encourage any non – indigene in political considerations against the indigenes in rights and privileges. Your Excellency, you’re undermining the growth and development of the Oil Producing Areas of Imo State through the undue promotion and encouragement of a stranger and non – indigene called and known as ” ENGR” UJU CHIMA KINGSLEY…THE SAID ENGR UJU CHIMA KINGSLEY IS FROM THE OGBA / EGBEMA / NDONI LOCAL GOVERNMENT OF RIVERS STATE, NIGERIA.

THIRD!!! To buttress the assertions of the origin and history of ” ENGR ” UJU CHIMA KINGSLEY, I shall furnish the personal BIO – DATA of the said ” ENGR UJU CHIMA KINGSLEY. These breakdown would suffice in the circumstances to wit:

FIFTH!!!! YOUR EXCELLENCY, I write this in expression of uncommon patriotism in order to sanitize the political space of quacks, criminals and fraudsters like UJU CHIMA KINGSLEY .. And In 2005 ,a prominent indigene of the Oil Producing Areas of Imo State was rejected by the Senate of the Federal Republic of Nigeria as a nominee for the Imo State Representative on the Board of the Niger Delta Development Commission ( NDDC) following returns in security scrutiny by the Department of State Security on ground of using a local government in Rivers State of Nigeria during his studies at the University of Port Harcourt. Only the intervention of God through the pleas for forgiveness by prominent Stakeholders which softened the hard decision of the Distinguished Senator Francis Arthur Nzeribe on continuation with the prosecution of the offender..

SIXTH!!!!! YOUR EXCELLENCY, it’s glaringly evident from the example of ” ENGR” UJU CHIMA KINGSLEY that your government and administration in Imo State doesn’t forward the names of your nominees for high level political appointments to the Department of State Security for security scrutiny in either positive or negative returns or report. This is politically unhealthy, especially in consideration of the global war on corruption and other crimes. We must be seen manifestly and truthfully, committed in the war on corruption , and crimes generally.

SEVENTH!!! You’ll recall or be reminded Your Excellency, that six months preceding the 2015 general elections, the Imo State Government under your respectable Headship, announced to the greatest celebrations of the people of the Oil Producing Areas of Imo State, contract for electrification of the immediate Oil Producing Communities. And these Communities included but not limited to Ikwerede,Awarra, Ochia,Assa, Obile, Umudike, Etekwuru,Ekugba, Umuorji, Mgbara,Oforola, Obokofia,Ukwugba, Obitti and Mguisii. And as I write this letter, the records in the Imo State Oil Producing Areas Development Commission ( ISOPADEC) show that this contract running into hundreds of millions of naira is perfectly executed, and the contract sum fully and outrightly paid for.. Detailed inquiries established that ” ENGR ” UJU CHIMA KINGSLEY IS THE CONTRACTOR, a business existence before been appointed as the Deputy Chief of Staff ( Operations) , Government House. Owerri. Regrettably, this contract was not executed as no electricity is supplied to these Communities. Similarly, every month, millions of naira are paid out as bills for power consumption in these communities. And yet, ” ENGR ” UJU CHIMA KINGSLEY as the Acting Managing Director of the ISOPADEC paid himself and his contracting firm fully and completely for a contract not executed, and still pays for phantom electricity bills through his cronies in the ISOPADEC. One is tempted to believe that Your Excellency knows about these obvious criminality perpetuated by UJU CHIMA KINGSLEY because of the imagined protection given to him despite representations by the enraged Stakeholders. And only a stranger would be involved in these generational atrocities against his supposed people, including his newest claimed Community ( Umuorji, Egbema, Imo State). It’s possibly correct to assert or infer that Your Excellency authorized these acts of criminality and dishonesty given the considered silence of the Imo State Government over complaints and representations in these circumstances. TAKE NOTICE, THEREFORE ,Your Excellency.

And conclusively, it’s my view in utmost good faith, that strangers shouldn’t be elevated and promoted beyond the indigenes, however the favourable circumstances currently. It’s therefore increasingly provocative, mindlessly offensive and unconscionably wicked to devour and divide the Oil Producing Areas of Imo State through established strangers like ” ENGR” UJU CHIMA KINGSLEY.

It’s my sincerest prayers and desire that a people be treated positively right and responsible at all times. The evolving negative resistance may consume your administration and governance . This is in good faith as always.

Accept as always, Your Excellency, the assurances of my highest regards, and best wishes. .

The Tragedy Of An Illiterate Populace… In Real Terms