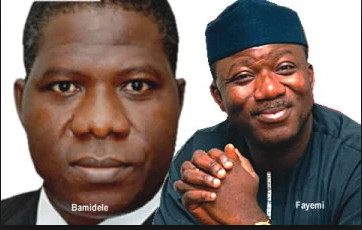 Reports from Ekiti state indicate that former governorship aspirant Opeyemi Bamidele was shot at the commencement of the Kayode Fayemi’s campaign rally on Friday.

APC chairman in the state, Mr Jide Awe, has confirmed the incident.

He, however, noted that the victim is currently at an unnamed medical facility.

A resident said a gunman raised his weapon, aimed at Mr Fayemi, and pulled the trigger, but missed him during a party parley with the APC candidate.

Some others said it was the police who were shooting in the air, while the former governor was being received by party men at the APC secretariat in Ado Ekiti, the state capital.

According to a reporter it was an alleged mishandling of firearms by a mobile policeman, who was said to be “over protecting” some VIPs shortly after the end of the event.

Journalists had hardly left the rally venue when sporadic gun fire were heard, leading to many scampering for safety in different directions, said the Sun newspaper.

The gunshots strayed in all directions, mostly towards the ground. In the process, one of the APC aspirants, Opeyemi Michael Bamidele (MOB) was hit in his arm, while one yet to be identified person was also hit.

An eyewitness told the newspaper “The mobile policeman, in his effort to protect the VIPs, was using his gun to push away the crowd; some members of the crowd got annoyed and dragged the gun with him. It was then he shot sporadically in the air, to scare them away.”

Another eye witness said: “The mobile policeman in question who allegedly mishandled his gun was mobbed by angry party members who eventually disarmed him. He was said to have been behaving funny earlier in the day, leading to some of his colleagues urging him to surrender his weapon. Some had even alleged that he was probably drunk.”

Meanwhile, the yet to be identified mobile policeman was terribly beaten by the angry crowd, and is feared dead.

Opeyemi Bamidele, former chairman, House of Representatives Committee on Legislative Budget and Research, during a fight with Fayemi in 2015 disclosed how he helped the APC Ekiti State governorship candidate, Dr Kayode Fayemi to realise his governorship ambition in 2011.

“I Michael Opeyemi Bamidele to the glory of God most humbly, can lay claim to the fact that I practically dragged him out of the PDP and took him to Asiwaju Bola Ahmed Tinubu to recommend him because there was a strong geo- political sentiment in Ekiti that the next governor of Ekiti should come from Ekiti North Senatorial District”.

“ Fayemi with due respect joined the party in 2006, six years after I had served as a national director of publicity of the party.

“I practically dragged him down, because, the three of them who were our friends but, were coming home as members of the civil society, were coming into the Villa, during the PDP reign.

Opeyemi is presently working for the Fayemi campaign, according to reports from Ekiti.