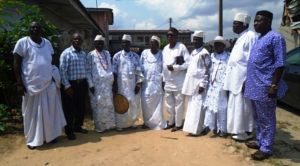 Following the controversy that greeted the alleged endorsement of Chief Christopher Obiuwevbi Ominimini as the sole candidate for Delta State House of Assembly, Ughelli constituency 1, the Executive Committee of the Orogun Council of Chiefs has declared that it did not endorse the aspirant, rather he was prayed for.

The Communiqué also emphasized that the prayer of goodwill said for Ominimini did not by any way place a “a curse” on any other aspirants seeking for election into the Delta State House of Assembly from Ughelli North constituency 1.

The Council also rejected the offer by Chief Ominimini to provide the entertainment of (Ukodo) and drinks for one year during the Council of Chiefs monthly meetings.

The Communiqué called on Chief Ominimini to forthwith “stop” publications in the electronic, print and social media regarding the issue of prayer said for him by Chief Johnson Akporugo as such media campaign could bring the Orogun Council of Chiefs to disrepute.