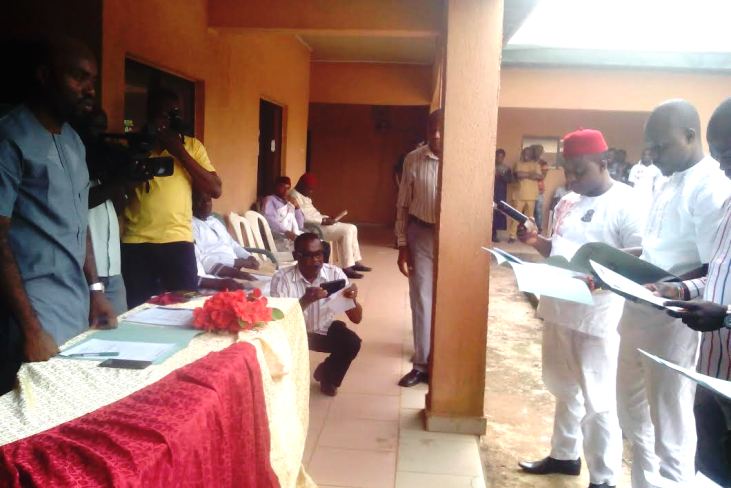 The Special Assistance on media (SA) to executive chairman of Aniocha North local government area, Comrade Matthew Anazia has condemned orchestrated report on the purported inauguration of the legislative arm of the council area.

Comrade Anazia said that the executive chairman of the council, Hon. Chuks Oseme never proclaimed any letter dated 15th January neither did he direct the Deputy Clark of the House to read or preside over the inauguration as it was reported in the pointer newspaper and an online portal using his name for the inauguration.

The media assistance, who described the story as untrue, mischievous and capable of misleading the people of Aniocha North, urged the people of the council to discards and disregards such report that is capable of destroying the local government.

According to the Media Aide, a�?The chairman of the council, Hon. Chuks Oseme was not aware of any inauguration of the councilors and never directed anybody to represent hima�?, saying that the purported inauguration was null, void and unconstitutional.

Meanwhile, Oseme on Wednesday has sworn-in 14 councilors in the council.

Hon Oseme while administering the oath charged the councilors to hold on to the oath and bring their wealth of experience to bear for the overall development of the council.

He thanked Governor Ifeanyi Okowa for the opportunity given to them to serve in a democratic setting. a�?It is the first time we are having back to back administration without caretaker committee.

a�?Our governor is a man of wisdom who believes so much in democracy, what we are doing here today, after God is our amiable governor’s hand work. He gave us the platform to do ita�?, Oseme extoleda�?.

While he enjoined the councilors to go back to their respective wards and reconciled with aggrieved members of their great party PDP, Oseme urged them to remove sentiment and rancour in politicking, noting that where only unity and love are, development abound.

Speaking on behalf of the councilors, the councilor representing ward 1 thanked the chairman for his wisdom and the good people of Aniocha North for their support.

a�?We are happy for what has happened here today for the peaceful swearing in of councilors. We thanked the chairman and all the support from our people during and after our electiona�?.

The climax of the ceremony was prayer offered by one of the female councilors.

11 thoughts on “Oseme Disassociates Self from Purported Councilors’ Inauguration”