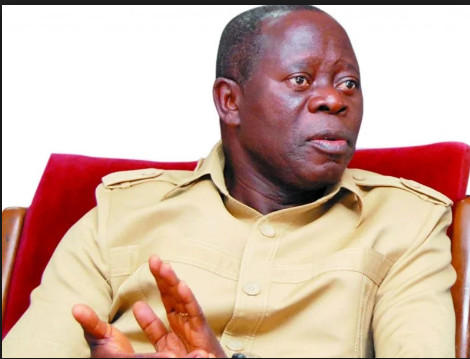 The ruling political party, the All Progressives Congress is today facing a serious crisis since the defection of the speaker of the House of Representatives, the senate president and other politicians. The defection of some of its former members was an incident very much anticipated because of the nature of its formation. The APC is an amalgam of CPC, ACN, APGA, ANPP and a splinter group of PDP, the nPDP. The party has no ideology and perhaps what brought them together was a common hatred for President Goodluck Jonathan. In fisherman phraseology, APC is like a basket of crabs and every crab wants to be at the top. The crisis that is choking the party is the dynamo effects of the primaries that were badly conducted across the length and breadth of the country. Even the wife of the president, Mrs. Aisha Buhari complained of the untidy nature of the primaries. Two major events if not well handled will see the demise of the party and Comrade Adams Oshiomhole as the willing undertaker.

The two negative effects of the primaries are Zamfara not fielding candidate for the governorship, national assembly and state assembly elections and the invitation by the Department of State Services to the national chairman to defend himself over allegation of bribery as regards the primaries. The Zamfara example is the greatest stinging rebuke on the leadership of Oshiomhole and no amount of propaganda can wash away the stain. According to INEC, APC can no longer field candidates for the mentioned positions because the primaries were not conducted within the stipulated period. This is enough for Oshiomhole to throw in the towel and whether he likes it or not, he is the undertaker for APC in Zamfara. The party has successfully disqualified itself from the race. It is a tragedy for APC shall not get a member for the national assembly and the state assembly. This is certainly how not to run the administrative machinery of party or in the words of Oshiomhole `to enforce party discipline`. It is now left for the party to handle this political disaster that is self-inflicted.

Some aggrieved members of the party had petitioned DSS that Oshiomhole and his executive collected between five million naira and fifty million naira to change names of candidates and that it was a case of the highest bidder. The allegations are very weighty and investigation should go to the root of the matter. There should not be any cover up or soft landing for all those involved. Oshiomhole has already denied the allegations and his media handlers are on the offensive. According to a recent newspaper report, a top aide to Oshiomhole said that a governor wanted to bribe the APC national chairman with #500,000 to do the said governor`s bidding. This is another weighty allegation. But my advice to Oshiomhole is that the governor should be named and witnesses called. It is not enough to say that some members of national working committee of the party are aware of the rejected bribe.

Politics, not doubt is a game of intrigues and those in office should try as much as possible to be above board. Oshiomhole by his utterances and disposition has invented many enemies for himself when he muted the idea of direct primaries. Those who lost out are ready to get their pound of flesh. But it staggers the imagination that all over the country, there were cries about unfair conduct of the primaries. Something must be wrong somewhere. All these cries of unjust primaries cannot be about hatred for Oshiomhole. On this score, Oshiomhole cannot escape blame as the buck stops on his table as regards the conduct of primaries.

What is happening is the greatest threat to APC since 2015. The party has already lost Zamfara state and it is only in the presidential election that APC is on the ballot there. APC may face electoral defeats in some states unless a lot of damage control is done. Some people are calling for the head of Oshiomhole. That may not be an easy solution. If Oshiomhole is removed today, that would give enough political salvoes for the PDP to campaign on the irrelevance of APC. On the flip side, retain Oshiomhole and continue to harvest the criticisms, distractions and resultant negative electoral effects. The image of an undertaker haunts the mind.

Re: Facts And Fallacies In The “restructuring” Conversation