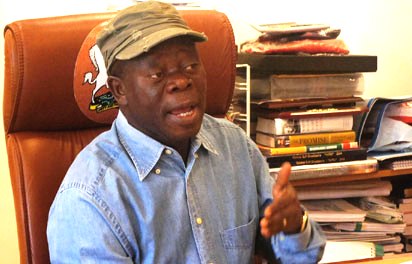 Comrade Adams Oshiomhole, the National Chairman of the All Progressives Congress, APC, has cried out over an alleged gang up against him by some unnamed party stakeholders.

Oshiomhole alleged that this group of stakeholders is populated by persons who were uncomfortable with the positive reforms his leadership was bringing to the party.

The APC chairman, in a statement issued by by his Chief Press Secretary Simon Ebebgulem, in Abuja, on Sunday, said suggestions in some quarters as voiced by one Alhaji Mumakai Unagha, who aspired for the party’s Presidential ticket that the APC could not win the 2019 general elections with Adams Oshiomhole as national chairman was far away from the truth.

Oshiomhole said the National Working Committee of the APC under his leadership was working towards repositioning the party to achieve greater successes.

While reacting to some of the claims made by the former Presidential aspirant, the statement read in part: “The totality of Unagha’s claims, without necessarily addressing them one after the other, tallies with cooked-up narratives being sponsored by some influential stakeholders in their respective states that Comrade Oshiomhole is responsible for all the problems in the APC at the moment.

“These influential stakeholders, according to the grapevine, have begun to mobilise to pass a no-confidence vote in the leadership of Oshiomhole, having failed to impose their preferred candidates on the party in the nomination process”.

The statement further read; “Comrade Oshiomhole did not become national chairman of the governing party to bring it down a notch from the pedestal of its 2015 electoral victory let alone to preside over its liquidation.

“Rather, his single-minded goal, from the outset of his declaration of interest in the position, was to deploy his capacity in helping to strengthen and reposition the party as a truly supreme and disciplined political entity.

“Although, it might appear fortuitous to some persons that he became national chairman at the threshold of the 2019 general election; the truth is that there is no accident in predestination.

“We must appreciate the fact that it has pleased the Almighty God to place him in the saddle of APC leadership at this time for a purpose.

“The purpose has begun to manifest in its vast flourish and ramifications: instilling discipline, ensuring party supremacy, promoting due process, dealing with impunity and executive arrogance wherever they manifest to undermine intra-party electoral processes in the states.”

Oshiomhole’s handling of the recently concluded APC primaries across the nation drew criticisms from some of the party’s aggrieved stakeholders including the Wife of the President, Aisha Buhari who did not hide her disappointment as she took to her twitter handle to vent her anger. Others who were not pleased with him included the Zamfara State Governor, Abdulaziz Yari among others.

27 thoughts on “Oshiomhole cries out: They are ganging up against me; They Want Me Removed”