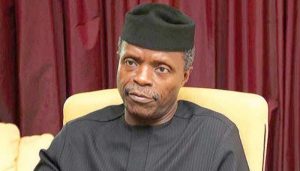 The Federal Inland Revenue Service has refutted the claim made by Timi Frank, former Deputy National Publicity Secretary ofthe All Progressives Congress (APC) that the tax agency supported APC up to the tune of N90 billion.

FIRS said that the claim was not onlu baseless but libellous.

The statement reads,
The attention of the Federal Inland Revenue Service, FIRS, has been

the All Progressives Congress (APC), who claimed that the FIRS

supported the`APC, through the Vice President Yemi Osinbajo with a

phantom N90 billion.
The FIRS wishes to state as follows:
1. That the entire allegation being spread by one Frank Timi that

mendacious, wicked, malicious and a calculated attempt to

smear the image
of the Service and that of his Excellency, the Vice

President, Prof. Yemi
Osinbajo. This campaign of calumny and villifying false claims are

entirely, libellous, unfounded in fact, irresponsible and a

organisation and demonstrates an abysmal ignorance of the budgetary

and expenditure process of the FIRS.
2. That in the last four years since Mr. Tunde Fowler has supervised

operations at the FIRS, the agency had not received up to N100

billion, per annum, as Cost of Collection from the Federation

whose records are open to the public.
3. That it is from the remittances from FAAC—which had never grossed

up to N100 billion, PER ANNUM, that FIRS pays the salary and

emoluments and trains it’s over 8000 staff, runs over 150 offices and

provides for other needs of the Service.
4. That given the above, IT IS NOT PLAUSIBLE nor DOES IT MAKE ANY

billion as suggested by Mr. Timi Frank and FIRS does not fund

political associations.
5. That FIRS is a creation of statute and its activities are governed

by the laws of the Federal Republic of Nigeria and financials

regulations and thus, IT IS NOT PLAUSIBLE, that its funds could be

expended in such a cavalier manner as suggested by Mr. Timi Frank.

6. That FIRS Budget and expenditure approval processes pass through

the Budget Office and the Ministry of Finance, before such are

presented to the National Assembly for Appropriation into Law. The

National Assembly committees, consisting of all parties and

inclinations exercise oversight function on all agencies of the

Federal Government to ensure agencies keep to the letters of the

Scrutiny and close monitoring by the National Assembly, the Federation

Accounts Allocation Committee and the Ministry of Finance.

7. It is therefore unthinkable, malicious and irresponsible for the

could be spent illegally and without budgetary approval.

8. It is equally alarming to note that this injurious falsehood and

blackmail could find space in our mass media without proper scrutiny

particularly with the availability of the Freedom of Information Act,

which broadly allows Nigerians access to information on expenditure of

public funds by government agencies. This all goes to show an

orchestrated and invidious decision by paid agents to discredit the

Service in order to achieve their diabolical ends, which is at

variance from the interest of Nigerians.
9. We ask members of the public to ignore the claims of Mr. Timi

Frank, with the ignominy it deserves as the former Deputy National

Publicity Secretary of the APC is seeking for cheap popularity and

relevance.
10. It is in the light of the foregoing observations, the FIRS

demands an unequivocal apology from the said Mr. Timi Frank and a

the next 24 hours. The FIRS shall pursue claims for aggravated

damages in libel and injurious falsehood against the said Mr. Frank if

he fails to meet these conditions in the next 24 hours.

11. This invidious publication is targeted as derailing the revenue

generation efforts for the three tiers of government in the nation.

This is calculated economic sabotage and hereby referred to the Office

of the Attorney General of the Federation officially.

12. We finally wish to assure all Nigerians that the FIRS did not spend and

could not have spent taxpayers money for political ends.

For the avoidance
of doubt, every kobo paid by taxpayers goes straight to the

Federation
Account domiciled at the Central Bank of Nigeria and that

account or appropriate any kobo there from to itself.

PUBLIC TRUST, which the agency operates on behalf of Nigerians.

Taxpayers money-including the operational funds of the Service- are

transparency in the sacred mandate of tax collection and public