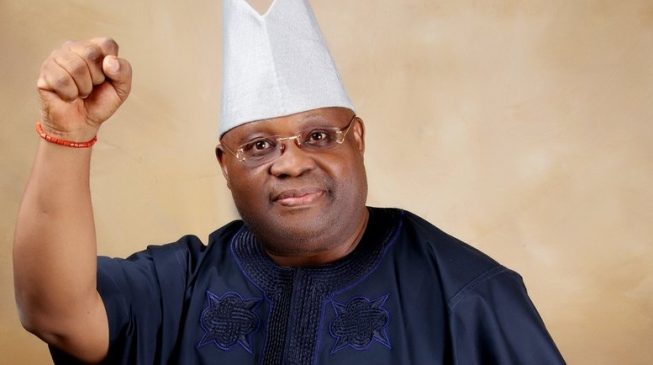 Two days to the primary election of the Osun State Chapter of Peoples Democratic Party (PDP), a social political group in the state, Renewal Youth Movement (RYM) has challenged one of the governorship aspirants, Senator Ademola Adeleke to publicly present his certificates within 24 hours or he will be dragged to court without delay.

The group in a statement signed by two of their leaders, Muftau Adegoke and Rasheed Adegbenro and made available to reporters in Osogbo, Osun State capital on Thursday, July 19, 2018 said they were taken aback by a report linking Senator Ademola Adeleke to certificate scandals.

According to them, the story tagged “The Man Jackson ‘Nurudeen’ Adeleke which has been streaming on the social media in the last 12 hours became a source of worry to them and that germane issues raised on the post must not be swept under the carpet.

“Senator Adeleke is not a private person. He is a senator of the Federal Republic of Nigeria representing Osun West Senatorial District and he is one of the 11 aspirants seeking the PDP ticket. We cannot therefore keep mute as if nothing was going on”

“The claim was that Senator Adeleke has no WAEC certificate and that he was recently held and later released by the State Security Services (SSS) in an attempt to use a pseudo person to help him write his WAEC examination at Alajue Grammar School, Ede. Is it true? Can that be the case?

“If he has WAEC certificate as he claimed, he must bring it out now. There is no shame in that. If not, why was he claiming that he possessed one?

“The detail given about the alleged criminal matter was too detailed to be ignored. We are of the firm opinion that Senator Adeleke cannot continue to be silence on these grave allegations. We also challenged security agencies in the state to speak out about this matter.

“Another thing was his claim that he studied Criminology at Jacksonville State University with official name of Jackson Ademola Adeleke. But the check at the school based in United States showed that he actually enrolled in the school n 1981 with major course ‘Law Enforcement’ and minor course ‘Political Science’ but was never awarded any certificate because he did not complete his studies.

“So, which certificate was Senator Adeleke displaying as the one obtained from Jacksonville State University? If his certificate was genuine, then, those who carried the fake news must be made to face the wrath of the law and if otherwise, the man in question has no reason to continue as the Senator not to talk of contesting the governorship election in our state.

“Our group cut across Osun State. We were part of the people that voted for him as the Senator. Therefore, we will not hesitate to drag Senator Adeleke to court except he publicly disclaim the said story and display his original certificate for all of us in the state to verify.

The group also urged PDP leaders in the state not to hide anything about this case. “We know money may be moving around to hide facts. But this is now in the public domain. We will ensure that we unearth the truth about this matter”.

Naira Closes At N359.3 To Dollar At Parallel Market